My son Isaiah and I went to see Son of God on Sunday. Not a bad movie, but not a particularly good one either. I was hoping to see a few Christlike interpretations that I never see in Jesus flicks. 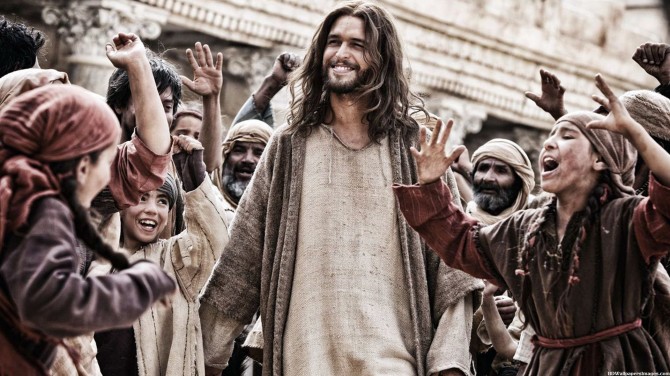 Literary interpretation of Jesus is tricky business. It seems to offend people. Son of God is being criticized for all sorts of interpretations, but I cut them slack. They — just like any pastor, theologian, or layman (including you and me) — attempt to fill in the margins of what is revealed in scripture to better understand the personality of Jesus.

Warning: my interpretation is quite different from the circles of movie producers. Perhaps this is a good thing. I wasn’t impressed by the interpretation of Jesus in Son of God, and I have to admit I am seldom impressed when I see Jesus portrayed on the silver screen. Son of God had a few redeeming qualities, but there were three Christlike characteristics that when I read Scripture — and I’ve read the stories of Jesus countless times — show me a unique perspective to the Easter story. These characteristics involved Jesus’ ability to see his future, deal with his foes, and overcome his fear.

1. Jesus’ Ability to See the Future

There is a questionable theological position that Jesus knew everything before it happened. There are some verses that are used to explain this, like Jesus proclaiming “my time is not yet” to Mary when he turned water into wine, predicting his own death and resurrection, telling the criminal they would meet each other in heaven, and so on.

I’m not convinced this is true. The gift of prophesy isn’t a magical sixth sense or of absolute omniscience, but this is largely assumed in Jesus. I suspect these biblical references that suggest omniscience merely reveals the character of Jesus as a man so focused on his mission of love that he didn’t let circumstances get in the way.

Take the miracles, for instance. Jesus taught on heavy issues like love and freedom from sin and challenged religiously narrow views of God — but then, lo and behold, people were getting physically healed in the process. What if Jesus was just as surprised as the disciples?

Son of God shows Jesus — just like all the other movies — as some sort of magician who had it all planned out. Consider Jesus, instead, a bit surprised when…

This changes the Hollywood narrative quite a bit. Can you visualize it?

When I dropped the seed of this idea on my Facebook profile, I was called a heretic, a blasphemer, and a man of weak faith. Some people just can’t fathom an interpretation outside their own.

For a moment, consider the reason why I suspect non-omniscience. If the Son of Man was a super-human who knew everything before it happened, I guess that means he wasn’t really human. I resist that idea. Jesus was not a trickster; he was experiencing the wonders of life just like you and me. If God surrendered himself for the world, it’s not real surrender if he had a backdoor escape route in case anything went wrong. I believe Jesus was fully man.

It certainly makes the walk to the Cross more significant. Would it have really been torture to walk through the crucifixion if he knew it’d all be okay in a few days? But if he didn’t know (and the case can be made that he truly felt forsaken), that changes the story for me. Jesus, focused on his love for God and others, went through with his torturous death anyway, totally okay with whatever circumstance God had in store for him. Now that’s super-human.

When I read the stories of Jesus, I find him much more passionate and authentic if he was just as surprised as his disciples at the awesome, challenging message of Love.

2. Jesus and His Foes

Here’s a thought: Jesus discourages us from demonizing people. We do this all the time anyway, but we shouldn’t do it because it makes us hypocrites. “Lord, thank you that I’m not like those sinners.” I believe everyone in the Jesus story was dealing with internal conflicts, and though they may appear twisted, they were trying to do the right thing.

Son of God dabbled in this idea. I thought it very interesting how Caiaphas (the leader of the temple priests) was portrayed as somewhat compassionate. Sure, he did all he could to get Jesus killed, but he was doing it for what he believed to be good for his people. Caiaphas felt justified in doing awful things in the name of God.

I appreciated the character of Nicodemus, another temple priest who later (after Jesus’ resurrection) converted to Christianity. He is shown earnestly trying to learn from the so-called heretic Jesus. At one point he argued with Caiaphas about the injustice of prosecuting Jesus in private, and Caiaphas snapped back something along the lines of, “But we don’t want to see our people murdered by the Romans!”

Even Judas was understandable. His intent was not to betray Jesus to death, but rather to reconcile Jesus with the religious leadership in Jerusalem. And Pilate, too, had all sorts of political pressures to contrast with his honest belief that Jesus was innocent — even his wife was pressuring him to compromise his leadership responsibilities.

Don’t you identify? I know these guys all did bad things, but they all felt justified at the time. I’ve believed some pretty awful things in my life, at the time thinking I was totally justified. Like the characters in the story, I have been a foe of Jesus.

Son of God has been criticized for removing Satan from the original cut (I guess he looked a lot like President Obama). It’s interesting, because I feel it made the story more personable and real. If Satan was the great puppet master of the story, the characters would be mistaken as his pawns. Remove the evil pointy-horned caricature from the story, and we have human beings just like you and me trudging through the circumstances life threw at them.

Some find comfort in believing their enemies are devils. I know some pretty dark snakes, too, but doesn’t Jesus challenge us to love our enemies? One of the first steps to loving them is thinking the best of them. Even though Caiaphas, Nicodemus, Judas and Pilate are bad guys in the story of Jesus, they were challenged with conflict between right and wrong, just as you and I are.

Come to think of it, I am suspicious of those who claim they do not face that conflict, because it is a conflict that all human beings face and should work to overcome.

Another disappointing depiction of Jesus: eyebrows furrowed and agonizing from the pain— even before the persecution begins. The interpretation shows Jesus almost afraid.

I believe Jesus was much more bullheaded in his ministry, and it climaxed in Jerusalem. He was ready to put the mission of Love to the ultimate test. Jesus knew Jerusalem was a hotbed for riots and religious dysfunction. His message of love and freedom would most likely not be well received.

To be fair, Son of God had the disciples question the wisdom of the move, which is what I interpret in Scripture. Jesus had a fearless “I don’t care what they can do to me” attitude. Remember the first thing he did: he flipped the tables of the money changers, and he followed by calling into question quite publicly the authority of the religious leaders, even calling them broods, vipers and hypocrites.

Jesus was picking a fight. Perhaps it wasn’t a sixth-sense prediction when he foretold his death. It may have been a no-brainer.

Again, Consider Judas. If he and the other disciples thought Jesus was pushing the limits, Judas’ “betrayal” makes a bit of sense. He was attempting to reconcile the radical Jesus with the religious leaders.

Consider Mary, also. I suspect Jesus drew strength from her resolve, but every movie I’ve ever seen shows Mary agonizing the death of her son. I read recently of the Spartan mothers. They would weep when their sons weren’t chosen for battle. It is an assumption to think Mary was an emotional wreck at the death of her son. I envision her more of a Spartan mother. A Spartan mother would say to her sons heading off to battle, “May you return bearing your shield or your head on its platter.”

Let me put it another way: I believe Mary knew this was heaven’s moment, not hell’s. So when Jesus turns to her mother and said, “Behold, your son,” it isn’t some odd appeal to her agony. It is a display of resolve and honor.

In every Jesus movie I’ve ever seen, Jesus suffers by staring off into space, the movie director’s way of trying to convince me that the torture hurt really bad. Jesus looks scared, broken before the first lash.

I don’t want to make light of the torture of the time, but Jesus knew he had victory in his grasp. He wasn’t surrendering, he was in the heat of battle. If he was defiant when sentenced, why not defiant when the unjust punishment came down?

During the lashings, I’d like to see the same defiance as when he told the religious leaders that yes, he was the Son of God. “Do you think this will stop heaven? Only 40 lashes? Hell no!” It wasn’t until Jesus was breathing his last that he asked if he was forsaken by God, but even then he declares “it is finished.” It’s almost as if Jesus is staring Satan in the eye and saying — quite audibly — now you’re in for it.

I have one reason why I’d like to see these traits portrayed on the big screen: These interpretations help me as a follower of Jesus.

This sort of puts the story of Easter in another light, don’t it? I have people in my life who act like Caiaphas, Pilate, Judas, Barabbas, and so on. To be honest, I have walked in their shoes. There is only one in the midst of all this human depravity who I am called to be more like: the person of Jesus.