It happened. I had another powwow with Paul Ryan last night at a Romney/Ryan rally in Colorado. I can’t help it; please forgive me for appearing smitten. But I must tell you: it is the coolest thing to have a childhood friend as the potential #2 leader of the free world.

Here’s my dilemma: I’m a debater and and thinker. I’m not swayed easily and I certainly don’t “go with the flow” with popular thought or trends. For crying out loud, my entire life is evidence of that. If someone can be accused of being against popular sentiment, it’s me. So understand the significance of my heartfelt conviction:

Mitt Romney is the BEST man for the tremendous job of President of the United States.

Sure, my old friend PD Ryan has stood up for him, but I can earnestly say that he has persuaded me. I’m excited about a Mitt Romney election. I wasn’t all that excited before, but now I’m thrilled. I have been persuaded that Mitt Romney is the best person for the job. 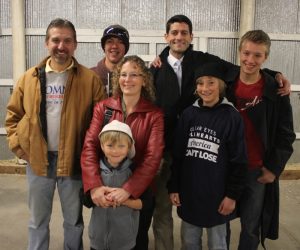 Do you agree? Perhaps you’re bitter that the primaries didn’t go your direction. Or perhaps you are one of the millions of 2008 Obama voters who are a bit disillusioned with your vote, but still uncertain about the alternative.

Whatever your reasons, I have three that are weighing with me that I’d like to share with you. The three reasons I’m convinced Romney is the right choice for presidency are…

So, I’m stumping for Mitt. Sure, my buddy Paul on the ticket is a huge plus for me, but I can honestly say that I’ve been persuaded. His running mate is the best man for the job of taking our country into the future.

My vote is incredibly positive, but I can’t help but be negative about the current president. On character, I’m not impressed with President Obama’s recent claim that votes are acts of revenge (see short video here). On business sense, the President scares the daylights out of me when he talks of a “Department of Business” in the federal government – that’s crazy talk (see this other good video). And on track record, the results must speak for themselves, and I’d be delusional to believe the idea that the President’s policies need four more years to work; the policies are failures that need to change for the good of our country’s future.

And that’s with a Mitt Romney presidency. It’s great that my old friend Paul will be joining him, but that’s not the whole reason I’m voting for Mitt tomorrow. I’m voting for Mitt because he’s the man we need for President of the United States. I hope you’re coming to the same conclusion.

Remember, I’m a debater and thinker. I welcome dissent and discussion, so: Who are you voting for tomorrow and why?