Imagine a world where where Obamacare members gleefully sent each other get-well cards with personal notes to the recovering members. Not likely, but that’s what happens with the group my family is involved in. And every last penny of $130,000 of medical bills since 2011 have been covered. Not a penny came from the government or a for-profit insurance company. 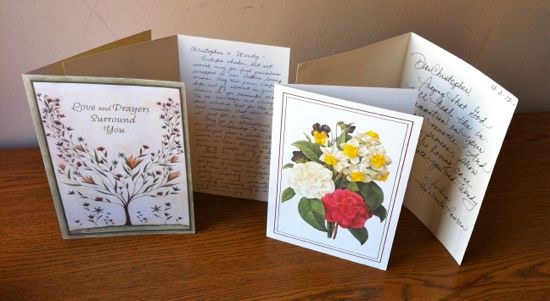 Samaritan Ministries is a cooperative group of people who pool their commitment to one another by sending medical reimbursement checks to cover medical expenses. The process makes much more sense, in my opinion, than the solutions given by the Affordable Care Act (aka Obamacare) or traditional insurance. One of the coolest things about the process are the handwritten notes of encouragement we receive from other members.

We put this to the test in 2011-2012 when my family was hit with three huge medical emergencies that wracked up $130,000 worth of hospital, doctor and medication bills (Micah cut his finger in a table saw, Wendy had a tumor removed from her throat, and I had a virus that attacked my heart). It was devastating and scary facing the pile of bills. Within a year, all reimbursement checks were in and all the bills paid. Plus we had cards like the ones above to encourage our recovery. We love it!

One of Micah’s checks came from a family with a 5-year-old son. The parents included this boy’s short get-well note written personally to Micah for healing his finger. It came with $1 of the boy’s own money. Micah was so encouraged that he made a custom wooden sword (from the very swords he cut the day he cut his finger) and sent it to him. Isn’t that just great?

The pain of those three medical emergencies are two years old, but the pain of the bills are behind us, too. I don’t know of many people in that situation with the best insurance who can claim such a thing. All of the $130,000 has been paid off. Every penny. The stress is gone and we are back to healthy, uneventful living (for the time being).

Standing on this side of $130,000 of medical bills, we can sincerely testify that Samaritan Ministries came through, which is the idea of the “Good Samaritan” principle. The system Samaritan has come up with is effective. Our claims were published to the membership, and the system distributed the payments equitably. We have been sending our monthly checks loyally (as we have since 2004 when we joined), and we do so with a bit of enthusiasm knowing that the money is going to another to help in his/her time of need. Multiply that by 25,000 households and you have quite an impressive group of people taking care of one another.

Are you interested? Samaritan is perfect for self-employed families, but also good for part-time workers or others with no insurance. Great news, too: Samaritan is one of the legitimate exceptions to Obamacare, so you will not pay the penalty that will be charged to those who choose to refuse insurance.

Wendy and I believe Samaritan is perfect for families. Investigate this for your family; it may be just the thing you need to fulfill the federal mandate to get insured. Visit Samaritan Ministries’ Website. They come with my strongest recommendation.