I finally watched God’s Not Dead. Since it was free on Amazon Prime, why not? I was told it stunk, but I watched it anyway. I found it challenging, but not in the way the critics thought I should. 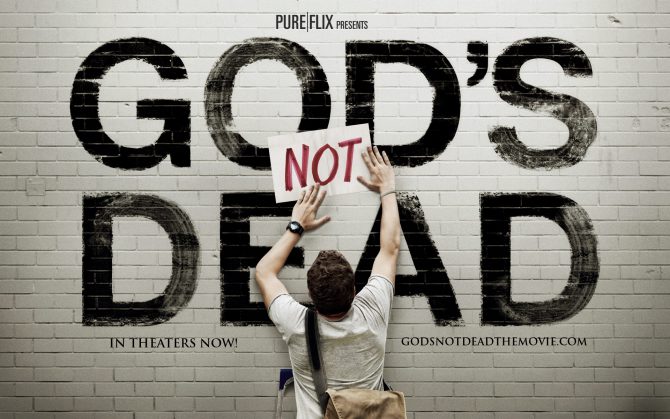 The critics were 83% in unison (it got 17% on Rotten Tomatoes), as if to say, “God’s Not Dead is just another cheesy Christian film based on a straw-man professor that doesn’t exist.” There is lots of snark out there:

You get the picture. The story, they claim, is intellectually dishonest. “Silly Christians, professors don’t assign ‘God’s Dead’ papers. Philosophy in college is just as it says, the study of thought.”

But when I watched it, it brought back memories of my college days.

What Does College Teach About God?

In one of the opening scenes of God’s Not Dead, the antagonist professor turns over a whiteboard with a list of philosophers — Nietzsche, Hume, Descartes, and several others. This was eerily similar to my Introduction to Philosophy class at Minnesota State University in Moorhead, Minnesota. The final paper assigned in my class urged the entire class to respond to Nietzsche’s 19th century claim, “God is dead.”

And everyone in the class knew how the “A” students needed to land. Affirm Nietzsche and the teacher. Or else your grade was going to suffer.

I had recently converted from atheism to Christianity (read my testimony here), so these philosophies of atheism were strong in my head, even intriguing. I would have appreciated an intellectual conversation about the existence of God or, as Nietzsche put it, “the hypocrisies and illusion of outworn value systems.”

Luckily, I had someone similar to Josh, the protagonist in God’s Not Dead who challenged the atheist professor. My fellow freshman’s name was Bob. He wasn’t in my class, but Bob was an outspoken Christian in our dormitory. When he heard of my challenging philosophy class, Bob gave me his copy of C.S. Lewis’ Mere Christianity. I devoured it over a weekend visit home, and it gave me the confidence and intellectual grounding I needed to grapple with Nietzsche and the likes of him.

This brings me to the point of the movie. The Introduction to Philosophy is sometimes a veiled Introduction to Atheism. At least that was my freshman experience. It became evident that the class intent was not to consider scholarly opinion. It was to draw me away from my new found faith.

Why do college institutions insist on intellectual dishonesty? It was hardly a secret: the cards were stacked against me. Why wasn’t Lewis (or Chesterton, another scholar-turned-Christian) given the same standing in philosophy as the famous atheists?

The critics of God’s Not Dead may have a point about the proselytizing of the film. It clearly invited viewers to convert to Christianity. (Was anyone really surprised when it did?) But I had a begging question in my mind: Why does academia insist on proselytizing incoming freshmen with atheism?

Here is what I find intellectually honest: good people — especially young people who aren’t so set in their ways — exploring the challenges of thought and faith. I got the exact opposite in Philosophy 101, a very similar experience to Josh’s in God’s Not Dead. The professor railroaded scholarly challenges to atheistic ideas. It was dishonest and unfair. I would have welcomed debate as a freshman in college. Instead, like the students in God’s Not Dead, I got dogma.

I tried harder in my Philosophy 101 class than any other. My final paper challenged Nietzsche, but I tried to find some truth in his discontent with religious hypocrisy. I felt like I was learning much and processing Nietzsche rationally and critically, like a good liberal arts student should. I suspect I would have gotten an “A” if I — like a few of my classmates did — agreed with Nietzsche and affirmed the professor’s atheism. Though I read every book and extended the academic challenge by reading additional authors unassigned by the teacher, I got a B in the class.

Proselytizing is intellectually exhausting. Sure, Christian movies tend to lean toward that, but at least they’re honest about it.

Academia, on the other hand, sometimes deters what could be a fair debate. To me, that is unfortunate. I would have welcomed such a discussion as a young adult.