I’m torn over Phil Robertson. I don’t even own a TV, but our family goes out of our way to watch Duck Dynasty. Part of me supports Phil, part of me doesn’t. For what it’s worth, here are my thoughts. 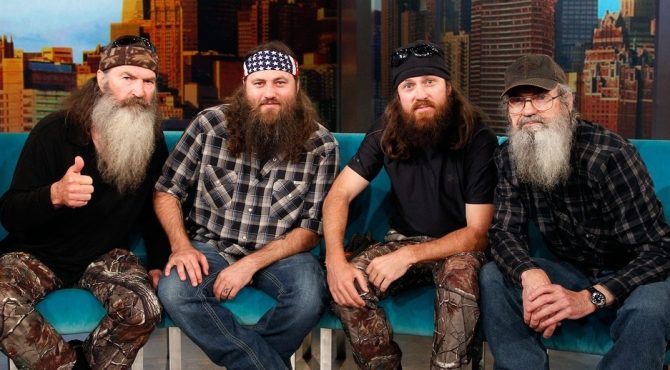 I’ll get to what Phil was thinking in a minute, as the media seems fixated on what he said. But to tell you the truth, I’m curious to know what A&E was thinking. I mean, really, they blew up a $400 million cash cow. It doesn’t make sense.

If I were a journalist, I’d be camping out in front of the A&E Executives’ front lawn, trying to get answers to some questions…

My suspicion is this: the A&E execs originally started Duck Dynasty as a show to make fun of hillbilly rednecks. “Ha, ha, look at how stoooopid they are.” Season after season, their plan backfired. People flocked to see the Robertsons. They loved them.

This probably annoyed the higher-ups. I can just hear them in their board meetings. “I can’t believe people are that stoooopid to be watching this stuff.” The editors kept coming up with more and more stoooopid shows, and the stoooopid people kept loving it.

Eventually their inner conflict got the best of them: they reaped the benefits of the success of the show while despising its message. As the ratings went through the roof and their network was put on the competitive map in TV world, they couldn’t help but feel their inner conflict. They were getting rich off other’s stoooopidity.

Note to A&E and anyone who finds themselves in a frustrating, contradictory position in life: Your judgment may just be the linchpin to your frustration.

Like a good debater, consider the premise. Don’t be so hasty to judge. You’ll feel the weight off your back when you consider another’s perspective. A&E should have asked: “Maybe rednecks aren’t so stupid.”

Maybe rednecks understand a bit more about life than they’re given credit.
Maybe something can be gleaned from their simple and frank approach to life.
Their views on family, hard work, love for one another and faith perhaps are something to be admired and appreciated.

I suppose this is a sad reality of humanity: not everyone has it in them to reconsider their prejudices. The A&E execs judged and attempted to control the talent that brought them their fortune. They saw an opportunity in the GQ interview to rectify their internal conflict. Not by learning a thing or two from a family that challenged their stereotype toward middle-American families from Louisiana. No, they instead tried to take out the patriarch.

That plan, too, backfired. Which makes me wonder who is so stoooopid here.

2. What Was Phil Robertson Thinking?

Throughout Duck Dynasty’s rise to fame, I have very much appreciated Phil’s personal testimony. It included a rough-n-tumble alcohol & drug ridden past. He spent time running from the law before coming to a humble surrender to Jesus Christ as Lord and Savior. (For a great representation of his history, see this video: http://youtu.be/FjqccYmx13w)

Nowhere had I heard in his testimony experience with homosexuality. No encounter, no personal experience, no individual calling to minister or befriend. When asked his opinion about homosexuals, he — like many Christians do — took the opportunity to pontificate on something he knew little about.

What he said was crass and embarrassing, definitely not something I can support. Phil’s contrasting female and male genitalia was an awful answer to GQ. I cringed when I read it. Didn’t you?

Yes, sure, I get our society’s double standard. Firing Phil while tolerating the moral demise of our culture is overreaching. Some are crying freedom of speech, but I’m having a tough time accepting that. We have freedom to act and react, and that freedom isn’t threatened here. A&E can do what they want, Phil can continue to say what he wants, the Robertsons can leave the show, and you have the freedom to turn it off.

But overall, this entire blow up is unfortunate. By speaking on something that he knew little to nothing about, Phil Robertson “The Duck Commander” surrendered a platform that he was very successfully bringing the love of Christ to people who otherwise would have never considered Him. Everyone needs Jesus, just like Phil needed him back when he was drinking and womanizing decades ago, ruining his family and his life.

To Phil’s defense, he clarified his GQ interview: “I would never treat anyone with disrespect just because they are different from me. We are all created by the Almighty, and like Him, I love all of humanity. We would all be better off if we loved God and loved each other.”

We would all be better off if we loved God and loved each other. That was an excellent message, the most excellent message, that Phil seemed to veer from in his GQ interview. This hurt his powerful testimony that he spoke with clarity, authority and love. I hope this message doesn’t fall of deaf ears.

3. What Are We Thinking?

This has led some to believe that this is an orchestrated marketing scam to get people all riled up. I’d be extremely upset if this is the case. To some, this is a line-in-the-sand moment that pits one another from each other. I don’t like how this conflict has stirred the pot in our culture.

I don’t believe this is a conspiracy. Phil is getting hammered by A&E types who do not appreciate his message, and A&E is going to either lose face or lose a ton of money. Why anyone would bring this upon themselves is beyond comprehension.

What about you? Are you with A&E or Phil? Or are you like me, torn?