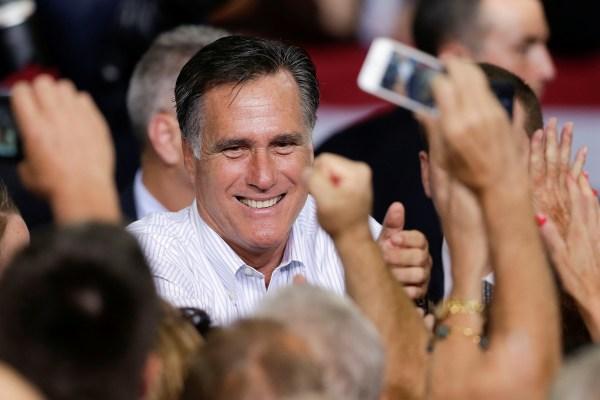 I’m in Oklahoma with Coach Vance Trefethen running a debate camp, and tomorrow another camp starts in Orlando, Florida. Training Minds – the nonprofit I run – will be running a LIVE BLOG during the Presidential Debates tomorrow night, and I’ll explain that more in the morning. Let me just say this: we’re going to have a fantastic time debating!

Today, let’s continue the debate started yesterday. As you read (“Debate Isn’t as Bad as You Think“), my friend Margie spent a good deal of comment real estate to dish on Mitt Romney – or, as she liked to refer to him, “Mic Money.” This was her chosen racial slur (“mic” is a derogatory term for Irish immigrants) for Mitt Romney. Her Facebook page was peppered with all sorts of attacks on conservatives – and, of course, unparalleled support for Barack Obama.

You must have had the Davis-Bacon Act on your mind, too. I mean, it pales in comparison to $16 trillion debt, trillion-dollar deficits, rampant unemployment, record government assistance claims, a Middle East in chaos, Iran developing nuclear weapons, Mexican cartels given government assault rifles, and [Democrat] voter fraud. Davis-Bacon trumps all of these petty items!

Just kidding. I had to look it up. The Davis-Bacon Act was passed 80 years ago, and democrats passed it. To this day, Democrats want to keep this law in place. According to Wikipedia, the summary of Davis-Bacon is:

The Davis-Bacon Act of 1931 is a United States federal law which established the requirement for paying prevailing wages on public works projects. All federal government construction contracts, and most contracts for federally assisted construction over $2,000, must include provisions for paying workers on-site no less than the locally prevailing wages and benefits paid on similar projects.

Basically, the existing law keeps jobs local. I was surprised that the law is actually a Jim Crow law. You know, one of those racist laws that were passed by Democrats in the early 20th century? You probably thought Jim Crow laws were all repealed, just like you thought Republicans were responsible for them. In reality, Democrats created Jim Crow and Republicans defeated Jim Crow. Davis-Bacon survived, legislation that actually accuses “negros” from taking construction jobs away from white folk. (Now, that’s not my language – I despise racism. This is the language of this 80-year-old law Margie wants to keep enacted.)

Mitt Romney thinks this law should be abolished. Therefore, don’t vote for him; that’s Marge’s argument. I’m surprised Margie is so excited over Davis-Bacon, and I was also surprised that anti-union people were too. Margie, like Mitt, is a business owner and apparently an entrepreneur. I don’t know anything about her business, but I wonder if she’s ever been restricted from hiring someone because of Davis-Bacon. Mitt showed his surprise in front of a group of small business owners:

Do you think this is the real reason? I don’t think so. See, Marge made this way too easy. I even asked her to get a bit deeper for me, liven this up. Here’s the FB thread: 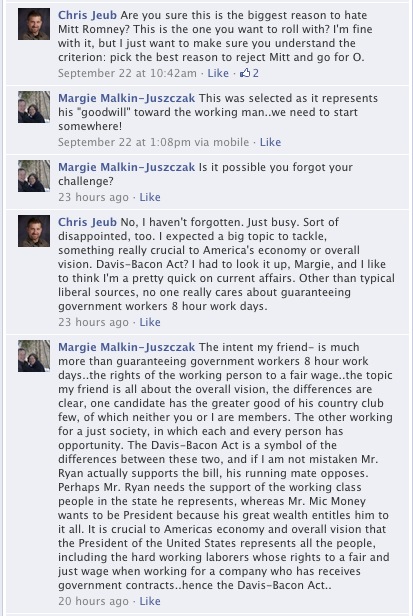 Now Margie was opening up, getting a bit more honest about her liberal leanings. Though Margie is apparently a business owner, she believes in unions. Davis-Bacon, she’s been told, is worth voting against Mitt Romney. Heaven forbid if this 80-year-old legislation is revoked and a local union member loses his job by some “negro” from down south. (Again, not my words…the bill uses this racist argument.)

Margie, I think you’ve been reading too much union propaganda. Davis-Bacon is an out-dated, racist, anti-growth law that just needs to go. In fact, it breeds corruption. Unions are extremely corrupt, so corrupt that anyone with a hidden camera stuffed in their collar could put together very damaging information.

So here’s the issue: unions. My contention is that they are corrupt and they should be regulated. Businesses have been thwarted from the unionization of the country, especially municipal unions, and that tide should change. That’s the real contention, isn’t it? I suspect Davis-Bacon is just one of many examples of this larger, more central issue.

Wait till I tell you about unions tomorrow. Some shocking videos were unearthed last week, at the exact time that I was researching this topic for Margie. But first,

Question: What is your opinion of the Davis-Bacon Act? Is this a reason that would sway who you vote for president?