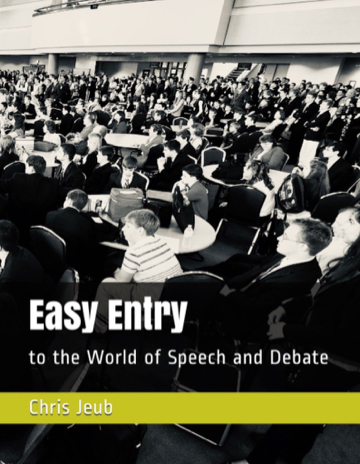 View Book
$27Buy from Monument PublishingBuy from AmazonBuy on Kindle

Easy Entry guides you through the complicated yet rewarding journey of speech and debate competition.

You’ll be competing at your first tournament before you know it, and with this book, you’ll do great and perhaps come home with an award.

Excerpt taken from the Introduction

I jumped into the world of forensics competition in 1993 when I took my first teaching job. I was young and perhaps a little naive, happily taking on the extracurricular “debate coach” position that apparently no one else in the school wanted. I took it on with gusto, and I immediately recognized the benefits of the activity. Wow, was I impressed, as you likely have been, too, if you’ve seen young people in competition. I remember sitting in awe watching kids as young as twelve stand up and confidently communicate their position on highly detailed political and value propositions. They were sights to see!

My problem then is a problem I still see among teachers, coaches, parents, and (especially!) students entering the speech and debate world: I knew nothing! There was so much to learn. Leagues to join, competitive events to enter, rules that seemed to change constantly, all new vocabulary, conflicting coaching philosophies, what tournament attire to wear, registration deadlines with late penalties and email announcements…gah!

I was drowning in information, just as you probably are right now. This book shows you the way into the complicated-but-awesome world of speech and debate — minus the headache of years of trial-and-error that I put myself through. I’m not complaining, I enjoyed every minute of it, but what I know now would have helped tremendously.

All I wanted back then was to be a decent coach, to not let my students down. So I challenged myself to master the chaos. I recall taking my hard-earned vacations to “cuddle up” with several inch-thick textbooks (there are plenty!) and devour them. I traveled the country to countless tournaments, always the first in line to snag up ballots, and got to know some of the world’s most renowned coaches. I was an English teacher who became an avid student of speech and debate.

Since my first year of coaching I have coached countless numbers of students, several national contenders and champions, some of whom were my own children. I’ve collected quite the trophy case of awards from all over the country (I’ll share it with you later). I’ve run the largest tournaments, started several speech and debate clubs in schools and homeschool co-ops, published best-selling texts on numerous competitive events, and served on the boards of established leagues — even helped start organizations that promote speech and debate competition.

That’s me. I love speech and debate and want the whole world involved, especially you. Now let’s talk about you and how this book will help you get involved AND SUCCEED in the world of speech and debate.

You’ll be competing at your first tournament before you know it, and with this book, you’ll do great and perhaps come home with an award.