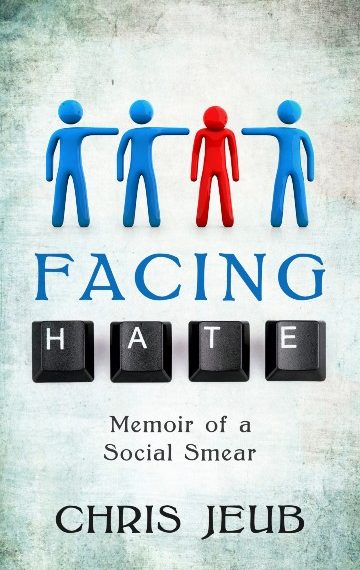 Memoir of a Social Smear

Facing Hate is a memoir of my journey through social smearing. Others will glean from my story — whether they’re victim of social smearing or they’re wound up in a hateful “mob” — they, too, can restore relationships and rebuild their reputation.

My smear started in 2014 when the idea of ruining someone’s life with little more than a social media account and line of gossip was rare. Not so today. Those with keyboards and an axe to grind can bring ruin to a life, a family, a business. In my case all three were brought to their knees and nearly ruined. The mob’s weapons of choice are online shaming, censorship, character assassination and ultimately canceling.

And they’ve been largely successful. Few make it through an online social smearing, and even when they do, they are forever changed, forever weathered from the new narrative written by mobs of hate.

But no one deserves it. Though social smearing appears to be accepted in today’s online world, it is an evil beast that must be defeated. My story reveals how.

I read the entire book to my family over the course of several weeks as we gathered together for Sunday morning breakfasts. Pardon the grandkids and babies in the background.

The audiobook for Facing Hate will be released on Audible on May 1, 2021.

Receive Notifications (and a free book)

For a limited time I am sending all subscribers to my blog a free copy of my family’s 2007 bestseller Love in the House: