The following are popular predictions of our time. Their cost to society is something to consider:

Millions, billions, trillions – such a waste. It’s disturbing to witness people hoard food and stock up on wax candles, sometimes at the expense of their life savings. Such a waste of money and human resources. The latest Mayan Calendar craze is wracking up its hefty cost to the gullible, I’m sure. 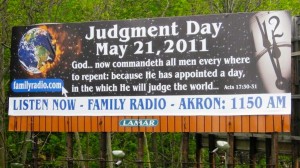 What is the cause for these things? I suspect it is fear. It’s irrational. I try to be intentional in ridding my thinking of such gibberish. In all seriousness, this is what Training Minds – the organization I run to help “train the mind for action” in academic speech and debate – tries to do. We teach critical thinking with the hopes that a new generation will rise up free from such scare tactics.

My wife, Wendy, and I wrote about such thinking in our book, Love Another Child. The book takes on the fear young couples have with hesitating to have children. It’s too bad, really. Like those wasting their money on the end of the Mayan Calendar, people refuse the blessings of life for fear of the end of the world:

“Every decade seems to go through its own scary, doom-and-gloom scenarios. In the 90′s, the tropical rain forests were on a course for destruction, and the entire West was degenerating into a desert wasteland. Today the jungles of Brazil are just as thick as ever. Remember the evils of Y2K? … For the past several years, every bird flu outbreak has a predicted course of wiping out one-fifth of the world’s population. It never does.

“Parents should push against any theory, idea or even apparent scientific finding that flaunts its arrogance by posing as a fearmonger. Because the element consistent with all these doomsday scenarios is fear. Fear and change, that is. And usually change that involves money to invest, lives to change and freedom to surrender. Fear is a tool to control the masses, and it is precisely what is evidenced in the environmental movement.”

Just something to think about today. See you tomorrow!