Take the next six minutes to watch this video. You’re going to have a gut ache from laughing so hard. But this video is more than just another stand-up routine. It reveals something about creativity.

Here’s a whopper of a lie, one that perhaps you have fallen for: I need to create something new.

New. Something that has never been done, never introduced to the public before, never even tried. “No one would be interested in the old,” we tell ourselves. Or the deeper deception: creativity requires creation without any help or reference or knowledge. Seeking any of these things is giving in and surrendering to fakery.

What a crock. Its a lie that often leads us immobile. Why even try? Creativity is extremely difficult when we think we’re giving in. Let me tell you something, there are countless unsuccessful, lazy, arm-chair QB types call creative people copy-cats and posers as they perform their beautiful creations. “That’s been done,” they scoff, and they go back to their mediocre lives.

In fact, the more creative you are and the more successful you are at it, the louder the critics get. The greatest king and wisest man on earth got it. He had a “duh” answer to his critics. “There is nothing new under the sun.” (Idiom) 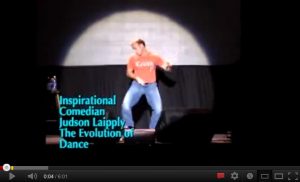 Judson Laipply’s incredibly simple video, though simple and cheap and amateur, is a beautiful example of creativity. Perhaps so many people love it because it breaks through their own doubts. It does for me. “This is absolute genius,” I thought to myself as I watched it. He took a history of dance moves – mere seconds of each – and strung them together for a six minute standup scene that has entertained over 200 million people.

What if he told himself, “Those moves have been done before. I need to create something new.” You know what would have happened? At best (and at the very, very best – millions of dance moves have been created that never reach the pinacle of popularity like the ones Laipply immitates) he would have been used by someone else in the future who had his idea to string popular moves together for a comedy routine.

Here’s an exciting reality for everyone destined to create: nothing is new under the sun. You have an image-of-God trait called creativity. Really, you have no excuse. The world looks forward to your creations.