This was the view off my back deck yesterday. The fire has spread significantly today, threatening evacuations of friends at the top of the ridge in this picture. This is one horrific fire that has displaced thousands of families. 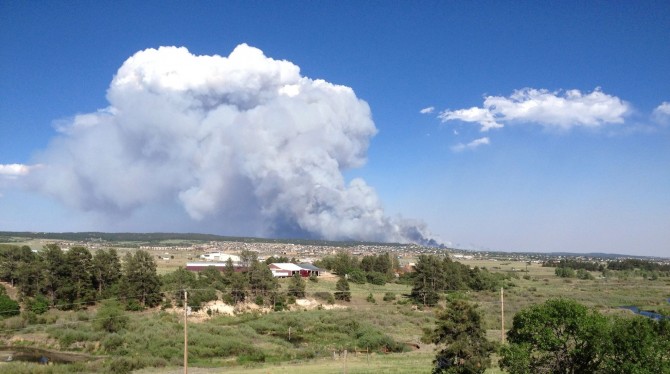 I believe we’re safe, for now. Everyone in the area has felt a bit helpless. See the YouTube video I took just moments ago (Wednesday, 2:55pm). There’s not much we can do when the wind blows like that. Besides pray.

We were in a very similar situation one year ago with the Waldo Canyon Fire. This fire was the most destructive fire in Colorado’s history, and my family even evacuated at one point. We did just as much praying—probably more—as we packed up our trailer with treasured items and took photos throughout the house with our phones in case we needed to make insurance claims.

This article is an unfettered appeal to you for prayer. Those families suffering the loss of their homes and livelihood need you. The firefighters, law enforcement, civil servants and everyone involved in fighting the Black Forest Fire do too. I believe prayer works.

I’m reminded of an article I posted on our family blog last year. Shortly after the fire’s worst day when the community was extremely thankful for the time being over, a noted atheist in the community posted an article slamming Christians for praying. He made the audacious, offensive and unwarranted claim that “the evidence” showed prayer had nothing to do with anything.

Well, I took issue with the claim. I hope this article—republished from July 5, 2012—encourages you to make an appeal to God:

Colorado Springs is a faithful community. Non-believers are somewhat of a minority in town. We are the home of over a hundred ministries – Compassion International, Focus on the Family, International Bible Society, The Navigators – just to name a few of the biggies.

When Waldo Canyon Fire kicked up less than two weeks ago, there’s no doubt Colorado Springs got considerable “prayer cover.” There were tens of thousands affected in the community, but there are millions of loved ones connected worldwide. Ministries touch people’s lives – that’s what they do – and prayers worldwide were sent to the aid of this Christian community.

This gave way to an article written by one resident and notable atheist, Barry Fagin. His article, Prayer Warriors Accomplish Little When Fighting Fires, threw cold water on the idea that prayer had anything to do with the efforts to put out the Waldo Canyon Fire. If we do anything, the article argues, we should think “kind and extremely rational thoughts” toward firefighters, technology, and other thoughtful people. Not “prayer warriors.”

Prayer vs. “kind and extremely rational thoughts.” I’m not sure what Fagin did to help the firefighting efforts, but he sure thought it necessary to use the fire’s tragedy to spread his worldview into this great community. In a followup article, he reinforced his thesis:

The evidence says that science and reason are more effective in keeping firefighters safe, in fighting fire, in saving lives, and in bringing rain than any prayers a “prayer warrior” might offer.

He seems pretty certain, but I’m not sure how anyone can ever KNOW if prayer works or doesn’t work. You can claim to feel it, hypothesize, point to scriptures, appeal to “kind and extremely rational thoughts,” whatever – but time passes. Either prayer was made or it wasn’t. The facts are what they are. Facts are what you have to look at – atheists and Christians alike – for validation of Fagin’s appeal to evidence.

In one fatal swoop of an afternoon of 65 mph winds, 346 homes were destroyed. Nine days ago the fire lines broke and the winds swept through neighborhoods of Colorado Springs. The city was on fire and people fled. Devastation!

A total of 32,000 people were evacuated. Thirty-two thousand. A thousand firefighters were on the scene. The weather forecast was not cooperating, either. All week predicted the same: 100 degrees and 10% chance of rain. We who live on the range of the Rocky Mountains know what that means: a sprinkle with a ton of lightning. Drought conditions left the landscape dry and the forests with piles of kindling wood ready to light up.

And I remember all too well the Hayman Fire of 2002. Before this year, it was Colorado’s most destructive fire, just eight miles from my home. It was out of control for the better part of the summer. We were total victims to the weather. The fuel of these dark mountain forests are incredible, and when ablaze you can’t just put them out with a bunch of fire extinguishers. The fire goes where the fire wants to go. Every firefighter knows this.

To say the least, the news we were dealt with after the city caught on fire was grim. We braced ourselves for the worst. Injuries, accidents, loss of property, loss of life. This community prayed and prayed hard. We did not take this call to God lightly.

2. The results of the Waldo Canyon Fire response team

Results. Skeptics want results, not warm-fuzzy thinking. I can agree with that! The last thing anyone in the path of this fire wants is a bunch of hot air. We have to consider the results of the devastation that befell our community.

For starters, consider the firefighters. There were nearly 1,000 of them at the time the fire rolled into Colorado Springs neighborhoods. Firefighters want to hold the line just as much as homeowners, and retreat orders – with hundreds of homes in the way – were probably difficult to follow. I thank God there was not one casualty on that horrifying Tuesday afternoon. Not one. And a thousand firefighters in 100 degree weather, you’d expect someone to twist an ankle or suffer from exhaustion. Number of injuries: 0.

Next, consider the evacuees. Out of the 32,000 evacuated, 2 people died in the fire. Two. I don’t want to make light of that loss, but that’s .006% casualties. The communities had minutes to flee. The success of the evacuation is unheard of, certainly beyond “kind and extremely rational thought.” Again, I thank God for his incredible shepherding of the tens of thousands of residents out of harm’s way.

But weather. What to do with this weather? The forecast was not going to get any better than Tuesday: 100 degrees, slight chance of rain, likely wind and lightning. I dreaded the results of my Weather.com search. I looked at the map and did the math: another doubling of the fire’s size, and we’d have mayhem. For my family, the fire would have been in our front yard. I prayed and packed (we were on pre-evac orders), but I’d bet that even the faithless prayed, at least for a change in the weather forecast.

Guess what happened? Wednesday came and unexpected humidity kept the fire from duplicating its growth. The following day rain dumped directly on Waldo. Since then there has been moisture every single day. And the day before the 4th of July, God dumped rain – little lightning, little wind, just a steady heavy rain – right on the fire. A 1/2 inch of rain, equivalent to 250 million gallons of water.

Come on, skeptics. Can’t you thank God for the rain?

3. Was it prayer, or “kind and extremely rational thought”?

As time passed, results were in the favor of this prayerful community. I suppose skeptics can call it luck, perhaps the results of tens of thousands “kind and extremely rational thoughts.” In the face of the results, that’s a tough argument to believe.

To me, it’s validation that we have a God that is totally awesome. I believe God enjoyed knocking down this fire, he joined us in the fight, and he smiled on Colorado Springs – his friends and family – when the fight was largely over. There is even “proof” of this. A double rainbow filled the sky after Tuesday’s rain, and Twitter and Facebook lit up with pictures of this magical sign from heaven. By the 4th of July, the fire was announced 100% contained in Colorado Springs, 90% contained in all its 18,000 acres. The anticipated July 16 containment date has been moved up to July 6th. That’s glorious news.

But who to thank? I don’t want to discount kindness and rationality. Skeptics are right in this: investment in technology and first-responder action should be top of our list on things for which to be thankful. I’m incredibly impressed with the leadership team of our mayor, sheriff, our fire chief and firefighters, the forestry service, relief volunteers, and thousands of others – including the supportive and understanding community who were recipients of their leadership. Impressive, coordinated, awesome – I cannot be more thankful for them.

But, skeptics, think twice before belittling those who prayed fervently for our community. The results are in, and it’s difficult to believe that prayer had nothing to do with them. Besides, such reminders of your godless worldview – and using this tragedy to remind everyone of it – isn’t kind. It’s cruel. And it’s not rational either.