[callout]The following is taken from Monument Publishing’s Ironman Curriculum, a curriculum I help rewrite every year with my team of writers and coaches. It is due for release August 1, 2015. Click here to preview lesson plans and syllabi.[/callout]

Technology managers talk of a “dominant design” in the marketplace. It’s a business discovery that big-wig companies attempt to make. The dominant design becomes the de-facto standard in the market place, like the Qwerty keyboard for typing, OS for computers, the smart phone for cell phones, and so on.

There are breakthroughs in technology where everyone steps back and thinks, “Wow, that makes a tremendous amount of sense.” All previous technological attempts get thrown out the window and replaced with the dominant design. The first typewriters that put the keys in alphabetical order got chucked when Qwerty[1] came on the scene. The dominant design may take a complicated learning curve (Qwerty takes practice and due diligence to master), but everything about typing becomes easier and faster when Qwerty is adopted.

Dominant designs fit markets like a glove. Once the design is figured out, everything else falls into place. Microsoft did this with their Windows Operating system in the 1980s. Who would go back to DOS? Apple did it with the iPhone, and though they didn’t monopolize the market, smart phones are in virtually everyone’s pocket. Dominant designs may be complex to learn, but they fit the market like nothing previous, and the market naturally clings to the new idea, the innovative breakthrough.

Speech and debate – the art of forensics – is the dominant design for modern educators. Thousands of students across the country prepare in their schools (public, private and home) for the tournaments at the end of their school year, and they congregate in the masses to train for competition.

An interesting note on dominant designs: they typically uproot the status quo. Speech and debate has traditionally been viewed as “extracurricular,” often cut from academic schedules. When I was in school, only the nerds went out for debate. Public speaking was something to avoid, not embrace. It was a requirement only as a single-semester class, and the idea of spicing it up with competition was hardly considered fun. Speech and debate as a competitive sport was barely imagined.

But for modern educators, it makes all the sense in the world. Excellence is front-and-center, and public speaking something to master. The cool kids of today suit up in ties and business attire, and they head to their rounds of speech and debate. They may find forensics difficult at first, but as the months of involvement go by, they realize: the forensics activity itself makes modern education successful.

There is little “extracurricular” about speech and debate. It should be all-curricular. Policy debaters barely need to crack open a civics textbook after a couple years of team-policy debate. In fact, they could write most civics textbooks. History for Lincoln-Douglas debaters is a joy to learn, not a chore. Mastering current events is a breeze for extemporaneous speakers and orators: the more they know, the more successful they are at tournaments. Literature for an interpretive speaker is their life!

[1] “Qwerty.” You may not have even noticed the “dominance” of the design before. The Qwerty keyboard is layout of every single English keyboard in the world, developed when the first typewriters came out in the late 19th century. The name comes from the order of the first six letters at the top left of the keyboard: Q-W-E-R-T-Y. 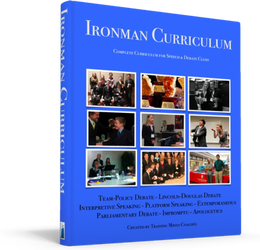