Like other homeschool leaders, I’ve done my share of postulating on what should be done with the Doug Phillips sex scandal (see Patriarchy Has Got to Go). But can I be personal with you? The discussion is disturbing me more than I like to admit. I’ve got a gut-level rage inside me that I haven’t felt for 27 years.

It hit me yesterday morning, Easter Morning, when I woke. I’m ashamed to say this: I had little enthusiasm for the Holy Day. My Facebook wall lit up with “He Is Risen!” posts, but I felt little urge to reply. My 12 children ran around my house and swept up hidden eggs, but I was trying to figure out why I felt so somber.

I mean, really. Doug Phillips isn’t the first spiritual leader who has nose-dived into scandalous immorality. I have been journeying away from his movement for over 10 years, so it’s not like he is my idol today. Okay, he cheated on his wife, assaulted his nanny, and is heading into a he-said/she-said civil court battle that will fill the tabloids for the next couple years.

What else is new? Why am I so disturbed?

I’ve got to go way back to 1986 to explain this feeling I’m having. At 16 years old, I began questioning my Catholic upbringing. I put my parents through hell with an unhealthy rebellion, my lack of faith being perhaps their biggest concern. I was miserable and angry, similar to how I feel now.

Disillusionment. That’s a lot of it. Up to that age I had put my faith in that which I was told was true. I wanted to believe it, but I just couldn’t pull myself to follow. I can dismiss a lot of my rage as just being a disturbed teenager, but at the time my feelings felt valid. I was finding more comfort in my immature atheism than I found in any doctrine my religious upbringing dished me.

So there I was, 16 years old and all ticked off at religion, worrying my mom to no end, thinking I was free from the restraints of silly ideas like God or Christianity. A year later, I encountered Christ and became a Christian.

Though I left Catholicism in college and consider myself non-denominational to this day, I have yet to witness a program that has the same love of Christ at the center of it. My TEC retreat remains my fondest spiritual awakening in my life.

Rising from the Dead

Yesterday was Easter, the day we are all encouraged to reflect on Christ’s resurrection. Instead, I couldn’t help but reflect on my own life and homeschool activism, the dysfunctional movement of Biblical Patriarchy in the community, and how God thought about all of this.

If you’re in the community of homeschoolers like I am, you know what I’m talking about. Doug Phillips’ fall is a big deal. Those closest to me keep telling me that I don’t need to feel too guilty — like I said, it has been a good 10 years since I was a fan of Vision Forum — but I still feel responsible for going with the flow too much.

Doug Phillips’ Patriarchy was one of many religious ideas I entertained since my conversion to Christianity, probably like most dedicated parents who attended pretty much any homeschool conference in the past 20 years.

Doug Phillips and his Vision Forum was everywhere. I was seduced into it, for a time, perhaps like you.

The families of the homeschool community stick together, and the Patriarchs seemed so perfect, so polished, so pious. Since my conversion to Christ, I was probably much like tens-of-thousands of dads on Vision Forum’s mailing list: I married, had lots of kids, and tried to raise them right.

So here I am, 44 years old and so angry at Doug Phillips I can barely stand it. And when other homeschoolers try to defend him, I get riled up even more. Especially other patriarchal leaders who seem more interested in distancing themselves from Doug’s signature theology of Patriarchy than fessing up and helping people make sense of the crap.

Once again, I’m 16. Like I was ticked off at my upbringing, I’m ticked off at the last 20+ years of dedication to the homeschool movement.

Yeah, I know, it was Easter. Pathetic, isn’t it? It was my anniversary, too. Wendy and I celebrated a couple weeks ago, so I guess I was off the hook there. Yesterday, of all days, was not the time to feel depressed about my life or Christianity, but I was. I was quite angry, too. Still am. 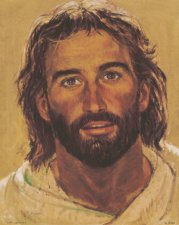 This is a picture of Jesus that was hanging in the room at my TEC retreat in 1987. I reflected and prayed yesterday morning — which is tough to do when you’re bitter — and this picture came to my mind. I prayed of my frustrations with Jesus, and I imagined him giving me this answer: “That’s how I felt when I entered Jerusalem.”

Think about this part of the Easter story with me for a bit. If you know your bible well, you’ll understand. Christ was on a roll, walking perfectly with the Spirit, calling down heaven on earth, working miracles and connecting with the persecuted people and even the oppressive Romans.

But the religious — the guys who should have been on his side — just didn’t get it. The “yeah but’s” of the Pharisees and the priests must have been disturbing to Jesus. He probably entered Jerusalem — the most religiously knotted place at the time — so ticked off at these guys that he turned their tables and called them thieves and robbers.

We know the rest of the story. These twisted haters were so enraged at Jesus’ message of love and redemption that they convinced the Romans to crucify him. They were threatened by him, they hated him, so they set out to kill him. The narrative spirals down from there. Jesus’ trusted friend Judas turns him over to these vagrants, Jesus is abandoned by all his friends, his closest buddy betrays him three times, and Jesus is left hanging to die the most brutal death.

In my religious, pious, holier-than-I-can-stand-myself attitude, I can turn this drama into a flannel board story that means nothing to me now. “Into your hands I commend my spirit,” as the Gospel of Luke recalls. You know, the Christ that had it all planned out and knew exactly how the universe was going to roll that weekend.

Today, I’m ticked off. More like the Gospel of Mark. Jesus looked up from his crucifixion saying, “God, why hast thou forsaken me?” Mark probably read this like, “What is up with this? Is this really the end?” Jesus’ life was coming to an end, the religious stronghold appeared to be winning, and it looked like it was the end of the story.

I see the same religious stronghold in the homeschool movement. They are the self-righteous Patriarchs. Their message has been filling families with legalistic, divisive, twisted religious piety, riling up the homeschool crowd to join them in putting the love of God in the grave.

This may enrage some who want to cling to Patriarchy, but I’m more resolved than ever: Patriarchy Has Got to Go.

Last week was the real bomb-dropping news of the depth of Doug Phillips’ corruption. For months since his “confession,” he (and other patriarchy leaders) have been trying to downplay the drama. His accuser** is suing Doug for tens of millions, and she’s citing Patriarchy itself a major culprit to her accusation of being Doug’s “sex slave.”

I received this private note from homeschool advocate Treon Goossen, a friend and fellow homeschool leader here in Colorado. She gave me permission to reprint her frustration with Patriarchy:

“I have been fighting patriarchy for a number of years now. I have been under attack because I am a woman and do what I do. I am also in contact with families who have suffered because of this evil – incest, beating children (adult daughters included) and wives, etc. This “cult” as you so aptly described it is a breeding ground for the oppression and abuse of women. I choose to stand up to it and use my voice to silence it. Thanks so much Chris.”

Jerusalem is falling. If you were part of this mess called Patriarchy, it’s time to make sense of it and start healing. Doug Phillips’ accuser is just one victim of the knotted-up religion of Vision Forum.

_________________________
* I apologize for being brief about my conversion experience. This is actually a great story that I’ll share with you sometime. My parents forced me to go after I totaled their car in a drunk driving accident. For now, just know that I didn’t want to go to this retreat, but I did anyway, and I met Jesus for real for the first time.

**The original wording “mistress” was changed to “accuser” after someone noted that a mistress implies a willing accomplice in a love affair, not a victim of sexual assault. The accurate term here would be “accuser.”