This is how most people watch debates: they sit on their duffs and watch. Perhaps they yell at the computer screen or live-blog or tweet their own responses. This may be personally gratifying — something I’ve done with Presidential debates in the past — but with the Bill Nye and Ken Ham debate over the viability of creation science, I genuinely wanted to learn something.

Enter THE FLOW, a system of recording arguments presented in a debate round that allows viewers to analyze and learn from the debate. Academically, debate judges are able to analyze the flow and come up with a decision that is more objective than you might think. If you grow frustrated with debates or don’t enjoy debates, it is likely because you don’t value the flow (or the debaters themselves aren’t flowing). Debate judges who don’t flow are frustrating to students, because they are simply casting their subjective opinion rather than weighing how well the debaters did in the round.

If everyone flowed like an academic debater, the arena of ideas would be a much more enjoyable place to be.

I have judged hundreds of academic debate rounds in my life, and I always flow them. At my debate camps, we even have this motto: “Flow every time; that, my friends, is the bottom line.” I will have a flowsheet of columns intended for each speech in the round, and I will draw arrows to and from the arguments as the debaters address those arguments made.

An academic debate round is usually quite complicated, and it is difficult to keep up with all the issues that are thrown down in the round. With the help of a flowsheet, debaters are able to keep addressing the arguments presented, and a judge is able to keep record of the responses to each argument in a round. In the end, the judge is able to pinpoint the arguments that weighed most heavily with him or her, ultimately making a decision afterward who won the round and casting the ballot for the tournament.

I flowed the Nye/Ham debate on a Google Spreadsheet and shared it with the world (you can read it here). I simply recorded what the debaters presented — I offered no analysis of my own on the flow — and made two tabs for each part of the debate (the actual debate round and the Q&A that followed). The third tab contains my Reason for Decision, which I wrote after the round of my own opinions of the exchange.

Do you see how this works? Debates are fun when you flow.

I know a lot of people who genuinely dislike the art of debate, but I suspect it is because they don’t know how to flow the ideas. When you understand how to flow a round, you warm up to the sport of it. Debates actually become fun to watch.

Want to see my flow of the Bill Nye and the Ken Ham debate? Check it out here. The third tab has my analysis of the few arguments that weighed my decision.

And try flowing the round the next time you watch a debate. You’ll find it much more rewarding and, one would hope, you will learn from it. 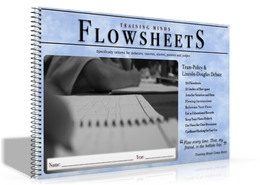 I actually publish coil-bound flowsheet. Check them out here.