Had a great time at the Duggar Wedding, but the way home was absolutely incredible. It’s a totally true story, but when I tell it to you, you will think I’m making it up. But it is the truth.

First, let me be real with you. I have 16 kids and a business that barely brings home enough. I like to talk business a lot, so it may sound like I’m boasting rich success, but those who know me and my inside workings, you know that I barely make it. The ministry I run and the accompanying publishing business pay the bills and keep the work rolling, but it is no cash cow by any stretch of the imagination.

To tell you the truth, I can get a bit depressed about it.

Sure, pat me on the back and tell me I’m doing the Lord’s work, but it wears on you after a while. I seldom work under 60 hours per week, I run camps across the country for other people’s kids, and I publish thousands of pages of educational content every year for homeschoolers. Every year for the last 10, my tax returns remind me: I’m barely scraping by.

In fact, I sometimes wonder:

But in a way, poverty (or marginally close to it) is a strange sweet point of mine. Without riches to rely on, I have had to rely on God’s provision. After 10 years, I must admit that that provision has never failed.

Jill and Derick’s wedding was beautiful, and we met a lot of people who are fans of both the Duggars and us. Wendy especially enjoyed connecting with people she had only previously known through Facebook or our blog. There is something magical about sharing your life in print and through media outlets. You have the opportunity to connect with people who are on likeminded paths in life.

One person in particular had our family on her mind. She didn’t know of our financial situation, but approached Wendy asking about it. We don’t broadcast our poverty, but we aren’t ashamed of it either, so Wendy answered her honestly, something like, “We are plugging along, but finances are tight. Always has been.”

The woman reached into her pocket and pulled out an envelope. She handed it to Wendy and insisted she receive it. “I feel like the Lord wants us to help you with this.” The envelope contained $318.

Does this sound like panhandling? That feeling creeps up in me, but we weren’t asking for any help at all. Wendy and I have learned long ago to let go of these doubts and let God take care of you. He was apparently working through this woman, and Wendy definitely didn’t want to get in the way of that.

The next day we started on our way home. We’re all-night drivers, especially with four drivers in the family. We can drive a good 12 hours through the night and get our family from Point A to Point B like nobody’s business. We set out at 10:00 p.m., anxious to get home by the next morning.

We broke down in Kansas.

The Bump in the Road

At 3:00 a.m., the engine died. Just stopped. Lydia was driving, I was riding shotgun. The van was drifting uphill and losing speed quickly. Lydia tried to start the van while coasting, but nothing.

And of all places to break down, we were in Kansas. Lots and lots of space. I suppose the likelihood of us breaking down on the side of the road without any civilization in sight are about 99.9 percent. Our van coasted uphill, onto an off-ramp exit that just happened to be there, we barely cleared the peak of the off ramp (I was tempted to get out of the van and push it a little, but we crested the hill) and we drifted just enough to pull to the shoulder, off the interstate.

We were in Ellis, Kansas. Population 2,062. And only one block away from one of the town’s only hotels, a brand new Days Inn.

I called AAA, the tow truck would arrive in two hours, so we walked to the hotel. The gentleman saw we were in need, and the night was mostly over. So, he gave us a great deal, only $110 for our rooms, about 1/3 the regular price. We were a family in need, the rooms were vacant anyway, and he did what he could to help.

Wendy and I tucked everyone in bed and all were back to sleep when AAA arrived to drive me across town to the mechanic.

No Choice But to Trust

I was a little wary of the mechanic. He had a car parked in the front with a hood open. I peeked in the window: hotrod pictures on the wall and an open case of beer sat underneath a jacked up car. I asked the tow truck if there was another mechanic in town. None. No choice, I dropped the van and returned to the hotel to get some shuteye.

Again, let me be real with you. Traveling with 13 kids on the road has its taboos. You never know how others will respond, and sometimes I expect a fair share of prejudice. I try to fit in (like anyone would, I suppose), but it’s really tough to fit in with this on your back window:

The hotrod/beer-drinking mechanic showed up and saw this parked in front of his shop. I connected with him at about 9 a.m. on the phone and told him the situation. Before talking about the van, he had to talk about my family.

He laughed, “Hole-leee expletive,” he said. “That is un-expletive-believable. I’ll see what I can do about the van. I’ll call you in a bit.”

Waiting for the News 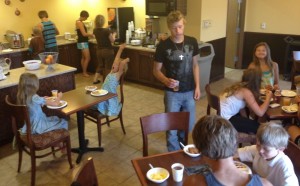 For a family the size of mine, a full continental breakfast really sets us up. We were well-fed with waffles, cereal, eggs and yogurt when the mechanic called me back. “Got ‘er fixed. I’ll come and pick you up now.”

It turned out to be the ignition coil, and swapping it out cost $189. Not bad at all. But the mechanic gave me some bad news about my front tire. It was bald, so bald it was showing wires. “You have nine more hours on the road. That tire’s gonna blow like a expletive balloon.” So he offered to put the spare on.

We talked while he worked. He told me that his mom was one of 12, and her mother was one of 13. He shared with me how many died, who was still living, but his family overall was expletive huge and “a helluva lotta fun.”

And again, let me be real. I have found over the years blessings beyond imagination when I stop short of judging another. This mechanic was a great guy, and I am glad to have gotten to know him in our short time together. The swearing and girly pics on the wall would have bothered me years ago, but I was very much appreciating the Kansas conversation at that moment.

Yet another blessing from God on this adventure.

Anyway, back to the spare tire. I had never put the spare on this vehicle, and for some odd reason, it was too big. The rim fit fine, but the tire was two inches taller than the original, forcing an odd rubbing against the fender at every turn.

“Expletive,” we said. And the mechanic referred me to another shop, the only tire shop in town, four blocks away.

Thankfully, this shop had three tires available the exact size I needed. The spare was in great shape, so I offered him a trade, and we swapped one of two used tires for the spare, and he charged me $20 for the other. I figured I got a free tire out of the deal! They rotated tires, balanced them, and put me back on the road within 30 minutes.

A good story, don’t you think? Do the math, and it becomes miraculous. The totals include taxes and all, but this adds up to an incredible testimony of provision:

Remember, Wendy’s friend felt led to give $318 to her before we left. It was what God laid on her heart. Incredible.

There are other tidbits in this story that I left out, all pointing to a wonderful story with God’s hand in on it. The mechanic’s secretary shared with me of her troubled grandson’s situation, and I told her I would pray, and I have. Checking out of the hotel, the clerk gasped at the discount her associate gave for our stay, and we agreed that “God had something to do with it.” We had some Facebook friends lined up in the area — more people we haven’t met in person, but they were geared up ready to help — thanks to the modern world of Social Media.

I hope this story encourages you as it encourages my family. Walking in faith is daunting — sometimes it appears impossible — but God does not fail. I don’t ever seem to be at a short of stories like this, and in every story there are three truths that I believe gives testimony to how God works:

I’m not making this up, folks. This is as real as real can get. Next time you’re dealt with a hardship, a change of plans, or just plain frustrated with how things are (or aren’t) working out, get ready. A very real adventure may be coming your way.