Stoa’s National Invitational Tournament of Champions was in May. It was awesome, and despite the San Diego fires, I am super glad I went. But this article highlights some concerns I have for the league. 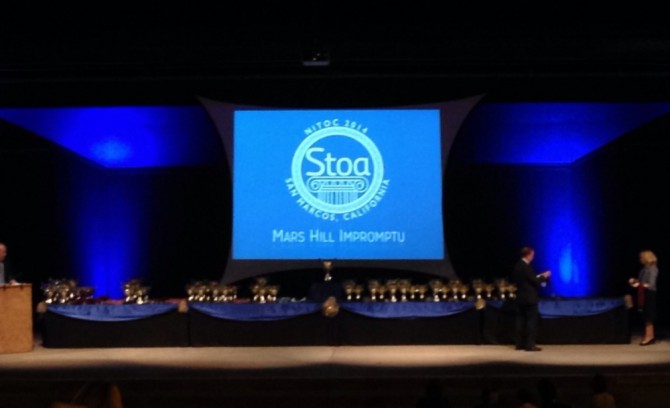 Trust me, I don’t enjoy criticizing, especially for a league consisting of volunteer parents. Count me in as one of them. In fact, I served on the Stoa board in 2011 and ran its national tournament in 2012. I leveraged my reputation for Stoa with all of homeschool speech and debate, as I have been involved since the dawn of the movement in 1996. And my family: I’ve graduated five kids through the program, have five currently of age, and have six more to send through. I’m right there with every parent family as a Stoa member.

I’ve got a lot of skin in this game. I know that a lot of the work involved is thankless work, but the problems I’m going to highlight make participating in Stoa more difficult on member families than it used to be. It appears to be getting worse, so I hope this criticism is welcomed for the sake of improving.

Overall, I believe Stoa could make significant impacts in the homeschool market, but they are failing. The early years of Stoa set a lot in motion that would have continued its exponential growth and its overall impact. Members enjoyed many of these initiatives for a couple years, but they have been thrown out the window since, and that is really too bad.

But if the new board could roll back and reconsider the early initiatives of Stoa, I believe Stoa would grow and prosper like it did at its start.

That’s what I’d like to focus on in this blog post. There are two focal points that I find disappointing in Stoa, but both could turn around for the better.

First off, the value of simplicity should always take the forefront of any organization’s business. Let me be clear: a league should always resist complexity. If you’ve been around these last few years, you have seen a number of significant changes, all making involvement more complex.

Take navigation of information, for instance. A quick look at the two national tournaments between 2012 and 2013 speaks volumes (NITOC 2012 in Colorado was set up by the 2011 board). Notice the simplicity of the 2012 navigation bar (you can still view it live here). Slick, smooth, one-worded navigations to house the immense amount of information regarding the national tournament. Compare it to the two following years (view the live pages: 2013 and 2014). The stark difference speaks volumes:

This isn’t to say complexity is always a problem; it just needs to make sense and work. Back in the day, NITOC introduced a complex double-elimination system for debate. It worked great and we loved it!

Another value all organizations should take into account — one that we teach our team-policy debaters, no doubt — is one that Stoa has apparently lost its way: we should implement no idea that has not yet been tried and tested. NITOC 2013 and 2014 had convoluted outrounds that were drafted in the weeks before NITOC, they had never been tried before, and they were very complex throughout. For those who remember how much fun it was in 2011 and 2012 double elimination rounds, we’re wondering why the change in the first place.

The number of NITOC events has grown, and I don’t believe the complexity that comes with it has helped the league. I’m a coach who is growing weary of explaining how two wildcards overlap with other events, how the two are supposed to sunset one with the other, how a new one is voted on every year, how Mars Hill used to be a wildcard but was adopted as a permanent event, but certainly no other wildcard would be adopted, and yada yada yada. This speaks nothing of the need for more rooms, more judges, and more competitors to fill twice the number of wildcards. This is exhausting.

Then there’s impromptu. The simplest, easiest, most popular event in Stoa. It’s dead. Why? Because some tournament directors found it difficult to find enough rooms for tournaments. For the record, I heard no complaints before Stoa raised the concern. Besides, a TD can always cap an event anyway, so it’s difficult to see how anything was solved with their idea. The result: Stoa killed the simplest individual event in the league, replacing it with another (Mars Hill) and two wildcard events.

And then there’s Parli. Don’t get me wrong, I love parli. However, it must be run as a separate event from traditional speech and debate. This adds 33% of time and tabulation demands on the longest tournament of the year. NITOC is now fully fleshed out as a six-day tournament.

And there’s SpeechRanks, arguably the most innovative idea to come out of Stoa. It was created to reflect the events of NITOC. It should have stayed that way, but Stoa reached over to other leagues. Rather than 12 events listed on SpeechRanks, we have 25. We have three debate events in Stoa. There should be 3 listings, 6 with speaker points. SpeechRanks consists of 11 total debate events. Two events don’t even have any registrants, one with only two competitors, but they hang there dangling for all of us to wonder why they’re even there. 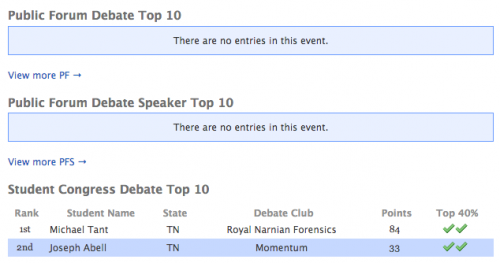 (Screenshot taken at the end of the year in 2014. Students had all year to enter scores.)

This speaks nothing to what SpeechRanks still could become. SpeechRanks could include social media apps, profile pages, and photo/document uploads that would make it incredibly useful to speakers and debaters, coaches, college admissions officers, and scholarship committees.

Realize that coaches all over the country waste time trying to make sense of this for their students, parents, interested new families, and others. Before every tournament, club session, family gathering, and conversation that tries to communicate how awesome it is to join Stoa, we the people need to stop and explain that which is not easily explained.

Complexity exhausts everyone. Simplicity brings ease and joy back to the forefront. Stoa could be a much more helpful and impactful league if they just valued simplicity once again.

Complexity isn’t the only reason Stoa isn’t succeeding as they should. The lack of planning is another big problem.

Again, I know this criticism is tough to hear, but it just has to be said. Most members get this, especially the ones planning tournaments and their family events around the plans of the league. I hear from them all the time.

There were two ambitious changes to the early Stoa that, for some reason, got lost. They made a great deal of sense a few years ago, and I suspect they would have solved a lot of problems of late. First…

The board should not run the current NITOC.

We left the 2011 NITOC up to the tournament director, and I intentionally stepped down from the board in order to focus on running the 2012 NITOC, already set up and in motion for the following year. We had the venue secured and announced a year in advance. We not only had rules out by September, we had how we were going to run NITOC out, too. Even by Christmas we had the registration page for NITOC online with judges registration wide open for community judges to sign up in Colorado.

All this has been rolled back these past couple years, and I find it heart breaking. Early Stoa recognized the importance of its leadership to be free from the intense management responsibilities of NITOC, and here’s why:

Stoa leadership should be totally focused on preparing the following year for the current membership.

If things kept rolling as they did when Stoa began, right now — this summer — Stoa members would…

Instead, for the past three years, the Stoa board has been no further ahead than the regular Stoa member. This is obviously a planning problem.

Families plan vacations, graduations, even weddings around the national tournament, so the lack of planning is incredibly difficult on families trying their hardest to participate in Stoa.

I have a unique view of homeschool speech and debate. I publish curriculum for all homeschool leagues, so I’m able to see the growth of the league through a salesman’s eye. I talk with people on the core level of their pocketbook, which is perhaps where it counts the most. I do whatever I can to persuade people to get involved in Stoa and participate in the wonderful speech and debate program.

But these past few years have been painful to watch. So much could be better if we turned our attention back to simplicity and planning. Both of these things could turn on a dime and Stoa could return to its optimistic future and healthy growth.