These are my youngest competitors, Tabitha and Noah. It is their first year debating together, and they are a hair shy from making it to their national tournament. They’re last stab at qualifying is this weekend. 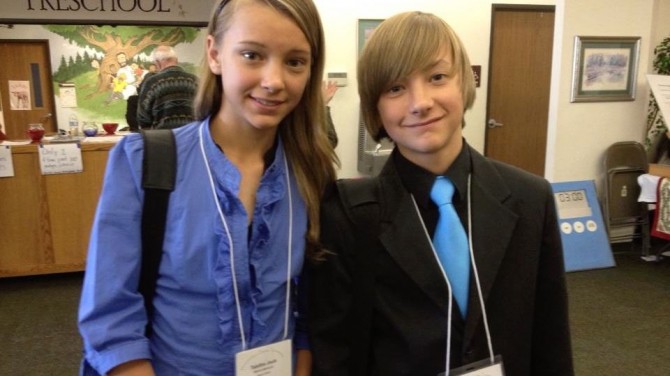 It’s actually rare when a young team (they started the year off as 12- and 13-year-olds) end up so close to nationals. Most kids have a year or two of competition in their belts. This leads to a question I have for you and your kids:

What does it take to bring your kids to nationals?

It is true that the activity of debate carries its own weight in value. Even if Tabitha and Noah don’t make it this weekend, I’m still very happy for what they have accomplished this year. They’re learning more than they ever would in any other academic discipline. But the opportunities they have all boil down to their competitive success. Their competitive success is what will…

You see my point. Opportunities open up for the competitors when they succeed. It all boils down to competitive success. And to get there, it takes coaching. Not just one or two sessions, but coaching throughout the year. My kids have gotten this in the following ways.

Training Minds Camps are in two places this year: Virginia and California. All my children make a goal of getting to camp in the summer. It’s expensive, but probably the most important kick off they can get.

The coaching staff for the California event has just been announced (see here), and the Virginia event will announce next week. The coaches at these camps are noted as the leaders in their fields of study. While other camps solicit club captains and parents, Training Minds seeks the best of the best to bring on board.

I know the national tournaments for this year aren’t even done yet, but early-bird registrations can save some money now. Take some time to plan ahead for next year. The links to these summer camps are:

My kids are home educated. They could do speech and debate on their own, but they find tremendous value in their local club. Together with about 20 others, they get together at a church and study all things speech and debate.

If the tournament is the destination, then the club is the journey. It’s their training base throughout the year. Their best friends are the ones that go to club with them. They get advice and training week by week. They learn from their peers and from the parents and coaches that attend.

I have a resource for this: Jeub’s Guide to Speech & Debate. The book itself is a simple read for your family, but it comes with a free $20 curriculum that lays out the plan for a club. If there isn’t a club in your area, no worries. Start one! Check it out:

The coaches I hire noticed a problem a few years ago. Though we coached at the beginning of the year and throughout the year in clubs, students were still coming up short once they got to nationals. In a way, we got them there, but then they were on their own.

This birthed the idea of the Nationals Intensive Training Camp (NITC, pronounced “nit-see”). Students come to the place of nationals a couple days early at a disclosed location. I fly in the coaching support. We brief, exchange flows, drill and scrimmage for the weekend.

The proof is in the pudding. For the last three years, our Lincoln-Douglas NITC debaters have won NITOC. This makes sense, really. While everyone else shows up on Monday at nationals for their first round, our campers have already been scrimmaging and practicing for two days.

Check out our two NITC camps, one for Stoa in May and the other for NCFCA in June:

See how this all works? Coaching support is what you need for this upcoming year. This is how opportunity galore will open up to you and your family.

Question: Do you plan to get involved in speech and debate next year?