Travis Herche and I worked on putting the long-awaited Keys to Lincoln-Douglas Debate to press, sent off today. We’ve been working on this for at least a year, he as the writer and me as the publisher. Its release is July 31 (see http://www.monumentpublishing.com/keys-to-ld). I have a special deal to share with you, but first let me say a few things about Coach Travis and his new book. 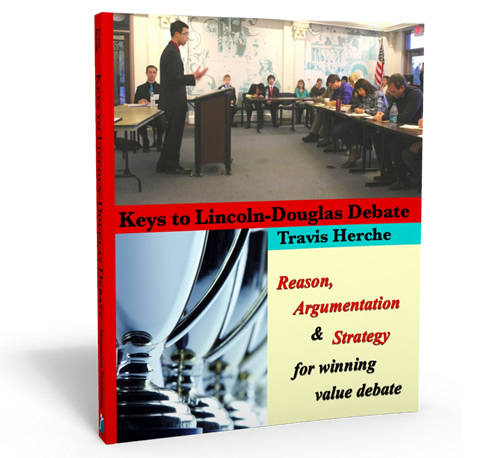 I’ve been serving the debate community since 1995, and very few coaches rise to the quality, enthusiasm and success of Travis. He left his own competitive stint in 2006 after he took top awards in speech and debate. He didn’t just dabble in forensics. He was all over it. He participated in countless speech events, but made sure he mastered both formats of debate, Team-Policy and Lincoln-Douglas. Back in the day, Travis was something else.

Most students of Travis’ caliber take on life and do great things. Colleges are certainly eager to bring on champion debaters, and the workforce is too. Debaters are the sharpest kids on the planet, in my opinion, and a champion debater stands a head above the best. Travis had nothing but opportunity ahead of him after high school.

Like many students, Travis returned to the speech and debate community to coach. I’m in the business of harnessing young talent trough the organization I run, Training Minds. He has come on board as one of the Training Minds coaches. I have a lot of former champions to join the team and help the older coaches with the greater program.

But I have to single out Travis as extraordinary in two respects. First, he truly loves to coach. He can’t get enough of it. I may have built a coaching organization, but I can’t say I love coaching like Travis loves it. I have traveled the country with him for tournaments and camps, and he is consistently staying up late with students, practicing for 12-14 hours in a day, and seldom growing weary of it. For a guy like me—president of a speech and debate coaching organization, one that prides itself with a long history of champions—Travis has been an awesome addition.

The second distinction is this: Travis has molded an industry of coaching. Seriously, Travis has created a new kind of freelancer: professional debate coach. Sure, there are coaches who are hired by school districts and perhaps get paid by a local club. But Travis has gathered together basic Internet technologies like Skype and blogging software and has made a living coaching students all over the country. His website explains it in more detail: www.travisherche.com.

In this regard, Travis is a like-minded entrepreneur. He met a demand with business prowess and ingenuity. Like me, he’s free as a bird, doing what he loves, and making a decent living off it. Do you have any idea how few people can claim this in their lives? And at such a young age?

If you get Keys to Lincoln-Douglas Debate, you’ll discover that Travis has a solid understanding of the specific format of Lincoln-Douglas debate. But I think you’ll also come to realize that Travis has a solid understanding of life. I suppose this shouldn’t be too surprising. Debate is a life skill — one of the best, in my opinion, that should be taught much more broadly than it is — that teaches kids to think, speak and engage the world. Travis isn’t only preaching it. He’s living it. I can’t wait for you to get to know him as you read these pages.

I believe Travis is still something else, and you are one of the many privileged enough to gleen from his years of competition and coaching.

What’s In Keys to Lincoln-Douglas Debate

Lincoln-Douglas debate is a 1-on-1 format of debate that centers on philosophical values. Learning to debate with excellence takes diligent effort, and the book guides you through it. Travis teaches readers a number of “keys,” some of which include:

The sound advice and proven tactics Travis gives is certain to provide the needed tools for building a champion debater. In the spirit of Training Minds, Keys to Lincoln-Douglas Debate provides the apparatus that will “train minds for action” – for debate rounds as well as the world.

The Deal I Have for You

Travis textbook retails for $25. All things considered, this is quite a deal. If you’re into Lincoln-Douglas debate, there’s a way to save 20% on the text if you order right.

Every year my publishing company releases the Red Book, which is a Lincoln-Douglas debate bestselling sourcebook. If you’re doing LD this coming year, you’ll want to get Red Book. (If you’re a value debater, you know this to be true.) It just so happens that when you purchase this sourcebook, you automatically are offered Travis’ textbook for only $20.

The deal is better than you think. Red Book retailed for $49.95 last year. Guess what we’re doing this year? We are selling all our sourcebooks — Red Book included — for only $30! Add Keys to Lincoln-Douglas Debate to that, and you get the two for less than you would have gotten last year. Honestly, that’s a great deal!

As you can see, I’m really excited over Travis’ new textbook. It’s releasing July 31 along with the Red Book, and I hope you get your order in soon. Here are some links for you: