I met a George W. Bush impersonator at the Platform Conference in Nashville. He was introduced as the actual president and had the mannerisms and appearance of the real Dub-ya, so much so that some in the room actually thought it was him. It became apparent that it wasn’t, but he didn’t let it rest. He played the audience with humor and even music, an absolutely hilarious routine that kept us in stitches. 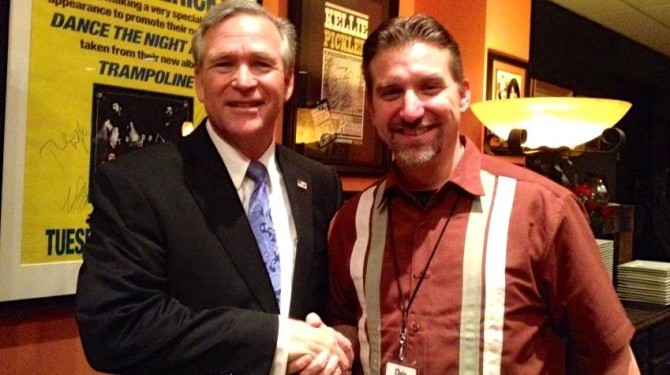 But you know what? He was an attendee of the conference, and he shared a quick testimony that resonated with me and, I bet, with many of the platform builders in the audience. It is this: He at first didn’t appreciate the opportunity he had with the striking resemblance of the President of the United States.

I bought his book My Life as a Bush and began reading it. I related to something John said. His very first chapter reveals his unwillingness to accept the story that he so obviously was blessed with. Despite the fact that so many people encouraged him to impersonate the president, he said on stage on Monday, “But I didn’t want to impersonate the president.” In his book, he writes, “I had seen my share of Elvis impersonators and Marilyn Monroe look-alikes…I had no desire to join the circus.” He called the preposterous idea “weird.”

What was the result of his avoiding the preposterous idea? A boring, unadventurous, stale life, one that he had never hoped for. He explains his life up the to point of the start of his career:

“Up to that point, I had lived an in-the-box existence. In fact, I had defined the box! I had lived in the same town, gone to the same church, and worked for my parents’ appliance company most of my life. Change and I were not good friends.”

I identify. I am conflicted between what I should do with want I want to do, between taking advantage of what has been given to me and developing what I think should be my life. I’m afraid that the first choice brings life and adventure and glory, the second brings a humdrum existence that is anything but.

John has given me a lot to think through. As I build my ChrisJeub.com platform (and JeubFamily.com and TrainingMinds.org, for that matter), I hope I’m courageous as he was to take the gifts he was blessed with and move forward on that journey.