This is a picture of the Showcase of Champions, a special two-hour event capping off the NCFCA National Tournament. My son, Micah, won Humorous Interpretation, the first ever to win the same title in both NCFCA and Stoa homeschool leagues. 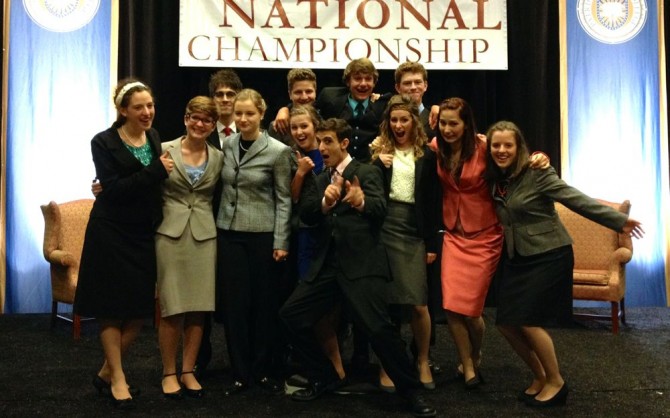 That’s right, we attended both national tournaments. Stoa and NCFCA serve over 5000 homeschoolers nationwide in offering top-level competition for families, and I can honestly testify:

I’m speaking from experience. I caught onto the vision of how awesome this activity was when it started in 1996. As an educator at the time, I saw speech and debate encompassing every single pedagogical strength I wanted for my own children. I’ve seen the leagues have their ups and downs through the years, but the awesomeness of the activity have always kept families committed. Sixteen years later, thousands are “training minds for action” (1 Peter 1:13) like never before.

But only 5000? There are over 2 million homeschoolers, so this constitutes a mere .025% of home educators. Personally, I believe all homeschoolers should be doing speech and debate. Why wouldn’t a parent want their child to be a part of the most exciting community of junior high and high school students on the planet? (I seriously believe this!)

Perhaps here’s why there is hesitation: speech and debate is time-consuming and complicated. It is like a foreign language to most people, and when you drill down into the details, it can become overwhelming.

The learning curve is huge.
Too much for most families.
That’s where I come in…I help make it simple and fun.

I do this each year by publishing five sourcebooks, each targeting all individual event and debate categories from both leagues. I hire dozens of champion speakers and debaters (and noteworthy coaches, too) to flesh out up-to-date information for both notice and experienced competitors who are preparing for the next season. These sourcebooks cover team-policy and Lincoln-Douglas debate, extemporaneous speaking, competitive apologetics, and both platform and interpretive speeches.

If you’re a homeschooler, you should join speech and debate. And if you think it is too much work or you don’t know enough about it, buy the sourcebooks to help you get started. You don’t want to put this off.

Trust me: You want to be part of this wonderful community.
Order your sourcebooks and get ready to jump into the homeschool sport of speech and debate.

I had the opportunity to connect with Michael Farris, the co-founder (with his daughter Christy) who started this movement in 1996 under the umbrella of NCFCA. He was moved to tears in front of the thousands gathered for the NCFCA award ceremony.

I was, too. For 16 years this movement has grown and impacted tens of thousands of students. These young people — through the inherent teachings of the events — grow to be people of strong communication, leadership, and faith. They’re leaps ahead of their peers.

Of course, my family will be doing this again next year, and we are already plotting our road to Nationals (both of them!). I’m not sure if we’ll get another national title (that’s getting tougher and tougher to do as the leagues grow), but that really doesn’t matter. I’m in this for the community, for the kids, and for Christ. This is where we’re meant to be, and I suspect the same for you.