Looking back on all that we did through 2014, my family has a lot to be thankful for. My 14-year-old daughter Tabitha penned this year’s Jeub Family Christmas Letter, a reflection on the year prior. I have a request of you at the end after you read it. 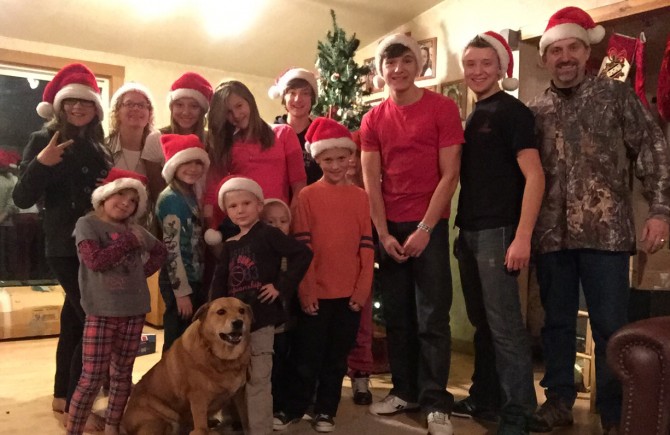 Merry Christmas! I (Tabitha) decided to write this year’s Christmas letter. When I think of the Reason for the Season, I think that Jesus would have enjoyed roller coasters, because our 2014 has been one big roller coaster, some happy and some headache spinny rides. He’s been with us for one wild and crazy 2014!

We started January off with two overwhelming yet exciting events. My dad led the first For Action Conference consisting of training young minds to be entrepreneurs. Some of the stars who attended this awesome event were: James O’Keefe, Andrew Pudewa, Josh Taylor, Travis Herche, and others. 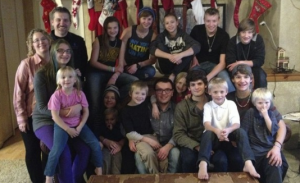 Yeah, I’m gonna stop name dropping. Unfortunately I wasn’t old enough to attend. It was mostly for the older sibs: Lydia, Isaiah, Micah and Noah attended, and Cynthia was one of the speakers. Still, it was awesome to see Travis with his wife, Christina, and when Josh and Jordan Taylor and James O’Keefe came over and spent an afternoon with us.

We started the speech and debate season with our club Monumentum. Our first tournament, however, had to be forfeited due to my Aunt Debbi’s sudden passing (she was my mom’s oldest sister, a really close relative). We piled in the van and traveled through icy weather to visit family and friends and to have a peaceful funeral for Aunt Debbi. Mom gave a beautiful eulogy to a packed funeral home. Debbi’s now in her real “home” for eternity.

When we arrived back from Minnesota, we started attending the semester’s PE+ program. We also started a homeschool co-op with another family where I met my best friend. The next tournament was one day only for all speech events. Micah took first in Humorous Interpretation and I took fourth in Open Interp.

In February, not only did my parents turn 60 and I 14, we started attending High Country, a homeschool group in Colorado Springs. We also packed up and went to California for a tournament where Micah came in 3rd in HI. We met many new friends and got to know old ones better.

The speech tournament roller coaster continued on in March where we had yet another in Colorado Springs. Also in March, Isaiah turned 18 and Zechariah 5 — now able to count his age on one whole hand. At the end of March we had (wait for it) another tournament. And of course we continued High Country, homeschooling and Monumentum.

April began with another trip to Minnesota where we visited with grandparents, aunts, uncles, and whatever other relative-types there are. We were home only three days before leaving to another speech tournament, this time traveling to South Dakota with the Denver club, SALT (which stands for nothing). This tournament was the best one I’ve probably ever attended. There was so much more than just a tournament; along with lots of close friends, there was this huge tire swing, basketball courts, and a frisbee field.

In mid-April my parents celebrated their 23rd Anniversary, Keilah began her teenage years, and Elijah turned 3. We went to Elitch gardens in the beginning of May on what they call “home school day.” We saw just about everyone that had been in South Dakota the week before. Josiah entered the two-digit age (10) and we ended the PE+ semester with an ultimate Field Day. We then left to California once again for the speech and debate finale, NITOC (which stands for something). 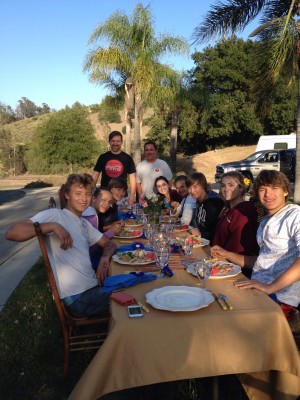 We began with NITC (which is my dad’s Nationals Intensive Training Camp) which started seven days of nonstop competition and fun. The California fires nearly cancelled the entire event, but the Stoa league managed to find enough alternative venues to pull off one of the largest national tournaments in history. And Micah received First Place in the humorous speech he had been performing all year! Call him the funniest guy in Stoa.

On our way back home, our 15-passenger van broke down we were “stranded” at our dear friends over Memorial Day. We painstakingly ate like kings on their beautiful front lawn, went surfing at the beach, and went home with boxes full of fresh California lemons. We also visited a haunted mill at midnight, but I’ll keep that story out of the Christmas letter.

June was even busier. Literally, every little square on the Calendar was filled with some important “save the date”, mainly for graduation parties. We started attending a summer “park day” (we were at the park constantly anyway), we did the incline for the first time, my five younger siblings went to Wings Like Eagles Horse Camp where they learned to vault on horses, and Micah and Dad flew to Washington, D.C., for the NCFCA National Tournament. Guess what? Micah took First Place in HI once again (watch it here)! He became the first and only homeschooler in history to win two national tournaments in the same event in the same year. Call him the funniest guy in the NCFCA, too!

In mid-June we packed up in the same fifteen passenger van and “drove 82 miles to the town” (that’s a kudos reference to Micah’s speech) of hot hot hot Arkansas for Jill Duggar’s wedding, which was beautiful. We got to stay at Fort Rock Camp, the family camp that was featured on 19 Kids and Counting. We also got to spend an entire day at the Duggars home, “partying” (the Duggars call it “fellowshipping,” but that’s okay) with about 200 others. Which, when you think about it, are mostly Duggars and Jeubs.

Our van broke down in the middle of the night in the middle of Kansas on the way home. But that didn’t stop us from having fun. My dad wrote one of his most popular blog posts about it called “God Really Does Provide.” He does!

Keilah and I managed to fit in three summer jobs mowing lawns. The boys would have volunteered before us if it weren’t for their summer job which was to rebuild a house that had tragically been burned to the ground by the Black Forest Fire. July wasn’t as packed with events. Micah turned 17 at the end of July. Dad, Micah, Keilah and Hannah all went to Texas for our annual speech and debate camp. During camp, the kids that stayed home (Isaiah, Noah, Josiah, Havilah, Joshua, Priscilla, Zechariah and Elijah) went to Dodge Ball Camp, also associated with PE+.

August slowed the year down a lot. Hannah turned 12 and Noah turned 16. We went to plenty of summer parties and had lots of late night activities including the time Micah, Noah, Keilah, Hannah and I went night swimming. It was fun…and cold. Oh yeah, Isaiah started attending public school at an early college program. He is proudly the first public schooled Jeub in 22 years!

In September we had our annual birthday party, the Jeub Birthday Bash, thrown for all the children at once. Isaiah went to his first homecoming dance. Micah and Noah got their driver permits. In October Havilah and Joshua, the twins, turned 9, knocking us down to only three car seats in the van. Mom says this is the fewest number of car seats in our van for at least 10 years.

When November came we celebrated Priscilla’s 7th birthday. Priscilla has the uncanny resemblance of our sister Alissa (who lives in Australia) when she was 7. Also in November, we went to (drum roll, please) Minnesota again! For the third time! We saw lots of old and dear friends and old family members… Very old family members. We had an amazing Thanksgiving dinner (thanks Grandma and Grandpa). Mom and Dad got to visit with some old friends, and Isaiah, Micah and Noah went to a retreat reunion and saw some of their not-very-old friends.

And now it’s December and the only thing that’s going on is Christmas. Oh yeah, that’s why I wrote this whole thing, to wish you and your family a Merry Christmas from the Jeubs!

[callout]Request: My family enjoys reading letters from friends and relatives, and we do so through the month of January. We would love to read yours! Send them to chris@chrisjeub.com or by mail to: Chris & Wendy Jeub, PO Box 3527, Monument, CO 80132. [/callout]