I get only four hours of sleep per 24-hour cycle. Since February 2013 I have been on a strict sleep pattern that has (1) improved my sleep quality, (2) increased my productivity by at least 50% per week, and (3) made me less tired and more alert throughout my waking day. Sounds fascinating, doesn’t it?

A lot of people think so. Though I haven’t blogged about this more than a couple of times since I started, I meet readers along the way who will pipe up and say, “Hey! How’s that sleep schedule thing going?” Most people agree — with just a little bit of hesitation — what I’ve been doing these past months is fascinating.

Admittedly, this is one of my more radical productivity ideas. Michael Hyatt — whose podcast yesterday was all about the value of sleep (“Sleep and Your Productivity”) — personally expressed concern to me when I shared the idea with him last summer. I asked him yesterday if he still had reservations about it, and he replied, “I really haven’t researched it, Chris, though I was fascinated when you spoke about it.”

Why is getting less sleep so fascinating? Because I am able to increase my productivity up to 28 hours per week. Do you have any idea how awesome that is? That’s literally over 1,400 hours per year, like hiring a part-time employee for free. And I’ve been more alert and actually less tired than I was on a mono or biphasic sleep schedule.

When I started this experiment, I had thought about daily blogging through my experience. However, I have to admit, I was privately skeptical. What if it didn’t work? What if Hyatt’s concern was validated, that indeed there were health risks? What if I was more fatigued than on other sleep patterns? Since my first blog post on this (see “The Everyman Sleep Cycle”), I have been toying with the cycle and perfecting my sleep schedule.

What Are Polyphasic Sleep Schedules?

There are three types of sleep schedules that people sleep:

The polyphasic sleep schedule that I originally adopted and eventually modified is called the Everyman. The traditional Everyman consists of one 3-hour pattern plus three 20-minute naps patterned evenly throughout the day. Its 24-hour cycle looks like this: 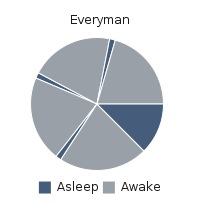 I was on this pattern strictly throughout my busy season of speech and debate competition (February through July). Let me explain to you some observations I made when giving it a try, then ultimately how I modified it to my liking.

Specifics to My Sleep Schedule 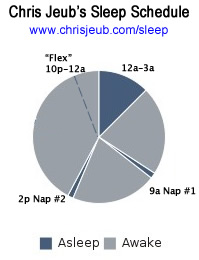 As mentioned, my personal sleep schedule is a variation of the Everyman. Here’s how my pattern goes:

This veers from the Everyman in two ways. First, I removed the third nap from the routine altogether. I found that a third nap was too disruptive to my family time. That was typically dinner time or close to it, and dad running to his room for a third nap was just plain weird. Instead, the 9am and 2pm naps (typically during my work day in my office) work nicely in my home.

The second variation is the “flex time” in the evenings, typically after Wendy and I put the kids to bed. When time is tight and I have to maximize every working hour of my day, I will stay up and get something important done. If my time is a bit more “flexible,” I may go to bed at 10 and get a “loooonng” five hours of sleep. The point is, these two hours are expendable as I see fit. I have found that this has been a blessing to me, my family, and my business.

What do you think of the Chris Jeub Sleep Schedule? I feel I’m still in experimental stages, but am growing more and more convinced that this schedule is best for me and my life. Use the comment section below to let me know what you think.