Though this is not my bestselling book, it is my favorite: Bronze Book. I’d like to explain why. If you aspire to be a champion speaker in Stoa or NCFCA — especially if you’re a coach — you’ll like this story. 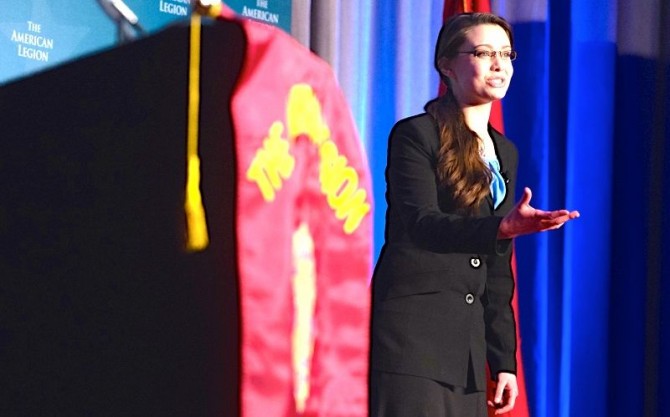 First, let me tell you about Ellen Densmore (pictured), one of the two editors of Bronze Book, who wrote the new educational chapters in the sourcebook. I’ll get to that in a minute, but let me quick highlight: Ellen won thousands of dollars in scholarships from the speaking skills she learned in speech, this being a picture from the American Legion. She’s now a student at Colorado Christian University with a significant amount of her college paid.

Just sayin’. Success in competitive speech can be worth thousands of dollars. But anyway, back to my story…

I started coaching speech as an assistant in the mid-90s. There was a seasoned coach who was considered the best in the upper midwest whom I was assistant to. One of her best assets was her ability to reference her experience coaching platform and literary pieces from years past.

She had a rich history of experience. In the middle of coaching a student or an entire class, she would perk up and say, “Oh! This reminds me of a speech from years ago!” and she’d run to her 4-drawer file cabinet and pull a folder. She’d then reference an actual speech from years ago as if that student were right there in the classroom with the students.

This is what Bronze Book does for competitors. We’re now five years into its yearly publication and we’ve amassed quite the learning tool for you:

Another awesome feature: we’re releasing this August 1, just a few weeks away, our earliest release yet. Just in time for school.

If you are heading into the competitive year and want to take your platform or interp speaking to the next level, be sure to add Bronze Book to your homeschool library. You will not be disappointed.

Thumb through Blue Book with me…