I was surprised at how emotional I got at the Vietnam Memorial last month when I was in DC with my son Micah. We followed this vet in. He found a name he had written on a piece of paper. And he started crying. Micah and I couldn’t help but join him. 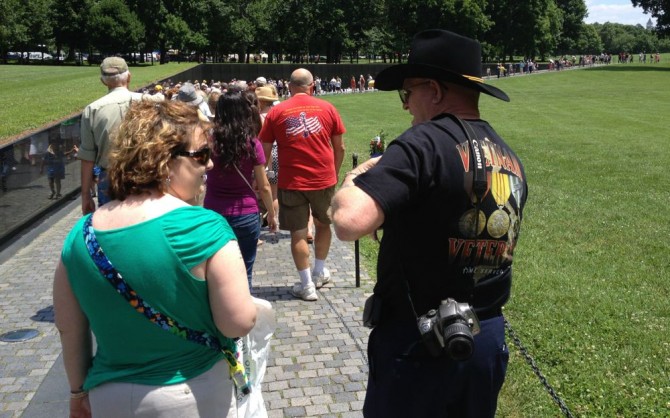 He didn’t realize Micah and I stuck around to watch him. I’m really glad we did, and I hope he didn’t mind. There are 58,286 names affixed into this stone wall. It helped to see someone who related personally to these names.

I guess this is what I’m reflecting on this 4th of July. We’re celebrating our independence from tyrannical rule. For 238 years we’ve fought to keep the tyranny from our homeland. In a few hours I’ll be packing up my kids to go to our town’s parade, and I’ll see veterans like this one march through the streets. They’ll get standing ovations — as they should — for keeping our freedoms secure.

But I am depressed. Let me explain why.

Every summer at this time, I am hunkered down in my home office writing the homeschool debate sourcebook, Blue Book. Students nationwide will preorder one of two versions representing to the two major homeschool leagues. Both resolutions are very interesting and timely (way more interesting than last year’s), but they’re getting me depressed.

One resolution was released in Virginia when Micah and I attended the NCFCA National Tournament (that’s when we made our visit to DC). The resolution is an international one. Resolved: The United States should significantly reform its policy toward one or more countries in the Middle East.

Studying the Middle East, I see a mess that dates back millennia. Today, our war effort in Iraq is falling apart, but it’s naive to think that the situation is new. Or that the mess is because of Obama or Bush. Our attempt to make sense of the Middle East dates back as far as the Roosevelt Administration who successfully aligned the US with Saudi Arabia.

Saudi Arabia. Arguably the most abusive nation on the planet. Thanks to the US’s relationship with them, they’re the richest of all Middle East nations. We’re their pals. That’s depressing.

Switch to the Stoa resolution. This is supposed to be an international resolution, but it is eerily domestic. Resolved: The United States federal government should substantially reform its electronic surveillance law.

The cases are stacking up and you can view them here. Government intrusion is supposed to be reserved for foreign threats, but today the government sees its citizenry as a threat. Domestic drones, NSA spying, unconstitutional searches, government wiretapping, and so on. If you think you are free from government intrusion, you’re delusional. You don’t have to be a conspiracy theorist to realize that the government knows everything they need to know about you. And that, too, is depressing.

I’m sorry to be such a downer. I’ve been neck-deep in research about our current wars and US policy toward personal freedom. The truth isn’t very encouraging.

Still, let me try to end this depressing post with a little bit of hope.

For 18 years I have been “training minds for action” (1 Peter 1:13) with the vision that academic debaters will use their training to make the world a better place. Most Americans can enjoy a festive 4th of July because there are a few public servants who dive into the real and unpleasant truth of the status quo, come up with ways to change it, and then advocate for that change. That’s what debaters do.

So these debaters. I put a lot of hope in them. They’ll come up with solutions to our disgraceful foreign policy and even worse government surveillance policy. They’ll pick up the pen rather than the sword and, hopefully, do just as much if not more good for our society. That’s my dream, anyway.

Happy 4th of July. And here are more pictures of the trip to DC with Micah…