I witnessed a hit-and-run in Cincinnati last week. A sedan clipped a motorcyclist. The motorcycle—one driver and a passenger—spun out. The sedan left, and I was the only one at the scene. What do to? 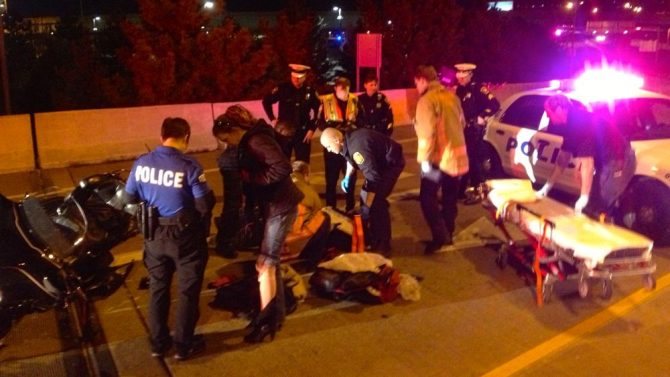 I applied a strategy that I had learned lately, the OODA Loop strategy. My friend Dan Hayes, a former antiterrorism and security agent of our military, shared the military strategy with his listeners in one of his podcasts. By last Thursday night, I had applied the strategy to several situations. Not nearly as dramatic as a hit-and-run, but I had conditioned my mind to the OODA Loop strategy just the same. Here’s how it worked in this emergency situation.

I then looped back to the beginning. This is the OODA Loop. I was at the scene ready for another loop…

See how this worked? Again, through the loop..

And on the OODA Loops went.

Others made OODA Loops as the event unfolded. Consider the driver of the car:

Shame on them. The driver’s character needs to slow at orientation. Instead of “I could get in trouble,” he or she could have thought, “I need to help correct this problem.” I, too, could have acted better. Orient: “These low-lives could take off…” and I could have decided to take a picture of their license plate. That sure would have come in handy later on.

The first two cars off the Interstate were bad, too. They did this:

The third driver had more sense:

The police came. The ambulance and fire department came. The man and lady were rushed to the hospital. The police took my statement. I walked back to the hotel.

Exciting evening, wouldn’t you say? The OODA Loop strategy certainly came in handy, and I’m certain I’ll use it again.