The For Action Conference is Tom Minnery, executive director of CitizenLink. I’ve known Tom since my 5-year employment at Focus on the Family from 2000-2004. He has quite a track record “for action,” and will be a wonderful contribution to January’s conference. 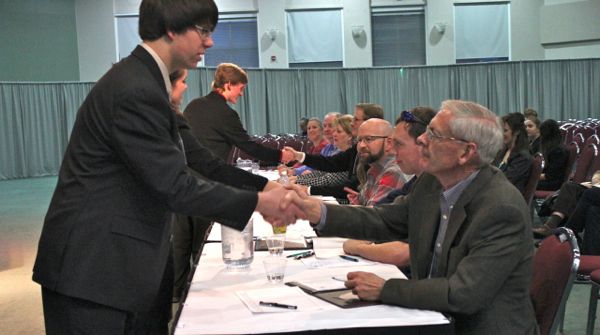 Tom is a public policy guy. He has led the Government and Public Policy division of the international ministry since 1988, playing a large role in shaping policy for family and religious civil liberties issues.

It took me a while to secure Tom as a speaker, and I’m happy to have him on board. There are two reasons that will resonate with you, plus one reason that is personal to me.

First, he’s contributing to the program as what I’m dubbing a “patriarch.” Most of the speakers serve as role models to the 16-24 year old attendees. People like James O’Keefe, Josh Taylor and others are in their 20s, examples who are just a step ahead of the young people we’re aiming for. Tom comes in with with decades of action and will be sharing from his experiences the necessary steps to success in life, particularly public policy.

I love listening to patriarchs in my life. Though I’m technically a patriarch on the For Action Conference list (I’m 43, but I still feel like such a kid at heart), I’ll be eagerly waiting to hear Tom pour out his wisdom. It’s worth listening to people like Tom who have poured out their life’s calling for decades.

The second reason I wanted Tom on board is because of his razor-sharp clean attitude toward politics. I’ve met few with a more wholesome and civil approach to public service than Tom Minnery. Personally, I grow tired with politics, and the temptation for me is to tune it out altogether. Rare characters like Tom have a steady, consistent voice to his convictions. We need more people like Tom in all areas of life, inside and outside the reaches of public service.

I have another reason, though it’s totally personal to me. I hope he doesn’t mind me sharing this with you (I’m pretty sure he won’t). Tom has supported Training Minds Ministry for years. I started it on my own time when I was employed at Focus on the Family, but Tom has kept an eye on me and has helped mentor me at key moments of development for my ministry. The For Action Conference, do doubt, was birthed from a frank and honest conversation he had with me over a year ago.

I had the idea for the For Action Conference for a couple years already, and I scheduled a meeting with Tom to see what he thought. For Action stemmed from my experiences with the homeschool speech and debate world, and I wanted to craft a time to bring these forensics students together to engage in public policy. I had honestly thought Tom would be one of my biggest supporters. To me, my dream was big, and I expected Tom to slap me on the back and compliment me on my conservative politics or something.

“I think you’re aiming too low,” Tom said. I was kind of surprised as he clarified. He explained that the world is a much bigger place than (1) academic speech and debate, (2) homeschooling, and (3) politics. This then led to a healthy discussion of how the For Action Conference could be for any young person who wants to make an impact on the world, whether that be policy or business or ministry or what-have-you. Public policy is just one channel to a ton of good work that needs young people today.

I know I need people like Tom in my life. Really need them. In a way, the For Action Conference is a group of mentors standing on one side of an active life looking over to its attendees saying, “We think you’re aiming too low.” We’re collectively looking the young person in the eye and saying, “The world is bigger than you think. Be brave and launch out. You have much greater purpose in life than you think.”

Because of Tom’s pointed feedback, he helped influence me to broaden the impact of this conference, include more people, and aim higher for greater vision of “training minds for action.” I hope you have a chance to meet Tom — along with all our speakers — in Colorado Springs for the For Action Conference in January.