At this time of the year, it’s tough for competitors to focus on camps. Naturally, we’re in the heat of competition. I just returned from a California tournament, and already my kids are gearing up to attend the Rocky Mountain Classic this weekend. Busy, but we’ve got to be attentive to opportunities down the road.

I have two camp registrations opening at noon. The camps aren’t till May and July, but they’re significant steps for students who want to finish the year off strong and start the next year even stronger. If you are a competitor speaker and/or debater, be sure to consider:

There are two reasons I’m asking for you to consider signing up for these camps now. First, space is limited, and you’ll want to make sure you get a seat. But the second reason is most important: campers end up the most successful. Seriously, check out these awesome testimonies:

“Going into NITOC 2013, I was definitely nervous for the challenge ahead of me. But then I learned of NITC—the amazing coaching, feedback, and debate drills (including the wonderful atmosphere of it all) made me feel completely ready and equipped! Everyone at Training Minds is so nice and welcoming, and I can’t wait to come back next year.” — Taryn Murphy

“Thanks to NITC, I went into NITOC feeling confident and prepared, and was able to have the most fun and rewarding tournament of the year. I strongly encourage everyone who qualifies to nationals to consider NITC. It will make you more prepared, fluent, and confident, just like it did for me.” — Matthew Erickson

Taryn is currently #3 in the nation and, together with her sister Ryan Kelly, won the largest tournament of the year last week in team-policy debate. At the same tournament, Joshua’s little brother Josiah (also an alumni, Joshua has become a Training Minds Coach) took 1st Place Lincoln-Douglas out of 105 top-notch debaters. And the last quote is from another TMM coach Matthew Erickson, whose heading up the LD camp that opens this afternoon. He gave Training Minds this validating quote after he won the National Championship in 2012.

The champions are telling you where they launched from: Training Minds camp programs.

I love to share the validation we receive year after year from the results. Students don’t get results like this by accident. It takes dedication and focus early on in their journey to Nationals. That journey starts with summer camps.

Registration opens at noon. Click the images below for more info… 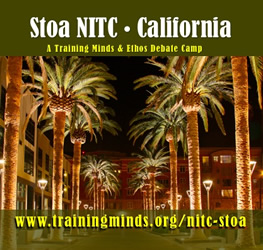 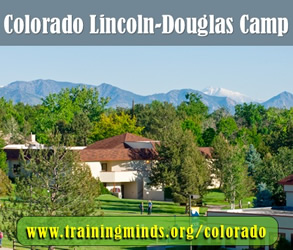 NOTE: Two other camp registrations are already open and filling up. Click these links for info: Texas Training Minds Camp and NCFCA NITC.