My bestselling books are Blue Book and Red Book, sourcebooks for academic debaters in two types of debate formats. Since 2007, I’ve placed students on the covers, and this year they have some cool stories behind them. 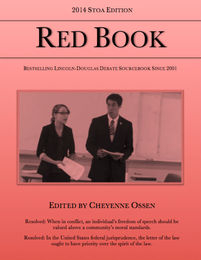 First is the Red Book Stoa Edition, edited this year by Cheyenne Ossen, 1st Place LD Speaker 2013. Both attended my training camp the weekend before (NITC), and I couldn’t be more proud of their success. This picture is of their semi-final round between Rebekah and Phillip. Rebekah ended up winning the round and advanced to finals, taking 2nd Place out of 139 debaters and securing her #1 spot as Stoa’s top LD debater for the year on SpeechRanks.

Second is Blue Book NCFCA Edition. I’m quite privileged to be coauthor of this sourcebook with Vance Trefethen, a coach who currently lives in France but flies into the US every year to help coach at my camps. The cover is of two students who attended the NITC camp just before NCFCA Nationals, Spencer Kolssak and Billy Bock. They posed for this picture for me (NCFCA didn’t allow photos during rounds), but here’s the cool story behind these friends: they’re both attending PHC this fall and they’ll be roommates. They told me they will be framing this cover in their dorm room.

Third, back to Lincoln-Douglas debate, is the cover for Red Book NCFCA Edition. This photo was taken during a cross-examination scrimmage at the 2014 NCFCA National Tournament at Patrick Henry College. On the left is Caleb Scott (Region 4) and on the right is Braden Harm (Region 5). Both are seniors this year and make for a great picture, don’t they?

Finally, my favorite. They’re on the cover of Blue Book Stoa Edition. They’re Reesey Rea and Megan McKinley, former students of mine who have loyally bought the sourcebook for years, plus attended more than one camp. They won the National Invitational Tournament of Champions in May, the top debate team out of 134 debate teams. I am bubbling proud of the both of them, and Megan is one of five writers for the sourcebook this summer.

All of these students exemplify the excellence that debate draws out of students. The sourcebooks are designed to make getting involved easy, educational and fun. I hope you pick up your copy and join debate!