I met my friend Dave this morning for a game of racquetball. I barely broke a sweat. He’s got perhaps ten years on me. Old guy against young guy. It was awesome. 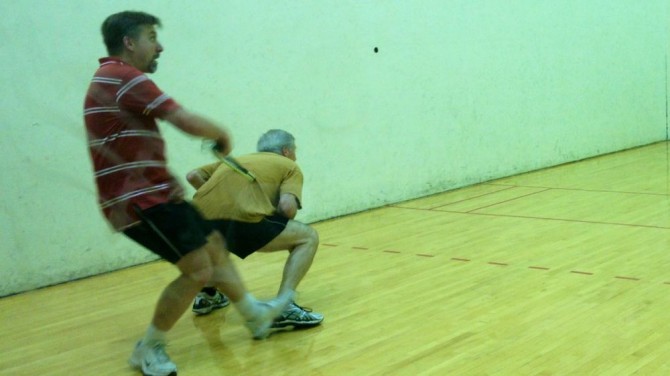 Everything I said in the opening statement is the truth. But it’s disingenuous. The gym was closed. The picture above isn’t of my friend Dave, it’s of my friend, Scott York, who gave me a run for my age two days ago. I’m still aching. This morning, I secretly rejoiced that the gym was closed because I am still sore from that game. I got a charlie horse in my leg last night and very nearly called Dave to cancel. I am relishing the fact that I’m resting in my dorm before the last day of the tournament.

Today’s the last day of competition at the National Invitational Tournament of Champions. Results from last night’s semi-finals will be announced. My daughter Lydia and son Micah are still in the game, and I have several debaters still in the fight (actually, my alumni locked up the Lincoln-Douglas semis, just sayin’).

But I’m tired, too. Looking forward to getting home to the rest of the family. I’ll post more later on the competition, but suffice it to say I’m looking forward to the post-tournament rest.