This story moved me.  The story of the man in the wheelchair and his father was noteworthy (see In Grisly Image, a Father Sees His Son), but when I got to the middle of the article and read about the man in the cowboy hat, I was moved tears. 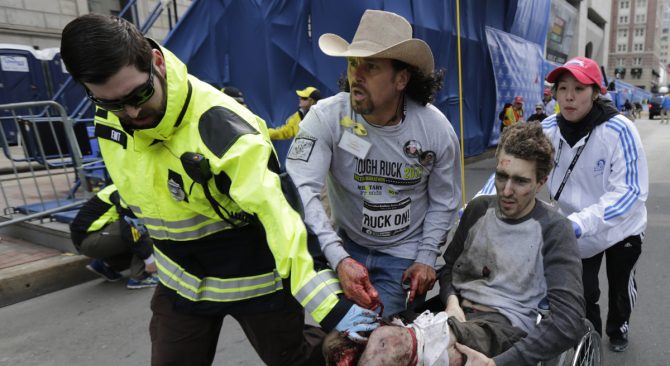 His name is Carlos Arredondo. He lost his son, a Marine, in the Iraqi War in 2004. He was in Boston handing out American flags in remembrance of his son.

The news is filled with pictures of people running from the bombs. I’m not sure what I would do in that situation, so I don’t want to sound critical of the innocent people terrorized by the senseless violence. But people were lying in the street with their legs blown off. Is running from the scene really the right thing to do?

Carlos didn’t run from danger. He ran into it in the attempt to help the first person he saw.

I suspect Carlos loves life and he loves freedom. I also suspect he knew full well of the dangers in front of him. But he ran in to help anyway.

The Man in the Cowboy Hat is my hero. The world would be a better place with more men like him.