Training Minds is bringing in Josh Taylor as our keynote speaker to our main camp in Texas this summer. Josh is extremely successful at one of the hottest genres in the online world, but I have a bigger reason for bringing him in that may interest you.

Josh Taylor is the co-creator of the YouTube channel Blimey Cow. He, along with his brother Jordan, began creating humorous videos at the end of 2005. The Taylors kicked into full gear in 2011 when they launched their weekly series called “Messy Mondays.”

Each week, a new topic is tackled, usually related to the Taylors’ experiences growing up as middle-class, homeschooled, Christian kids. January 2012 hit big when they uploaded a video called Seven Lies About Homeschoolers, which went viral, and currently has 1.7 million views on YouTube. As of today, Blimey Cow enjoys over 273,000 subscribers and 38 million video views.

Suffice it to say, Josh is an uber-cool YouTube wizard who you’ll love to meet, but his cool success is not the main reason I’m so jazzed about his keynoting. The real reason: Josh wants to equip speakers and debaters with real-life direction.

Our speech and debate camps “train minds for action,” specifically in the activities of speech and debate competition. You probably know that already. Our track record is quite impressive, sending countless kids to national competitions every year. We consider our success fruit of that which we do well. We count trophies just as Josh counts subscribers.

But these things aren’t the real reward we seek. Our treasure is in heaven, you might say. We are much more interested in preparing you for life. Josh is the perfect keynote for this goal.

Josh is a very talented and funny guy (especially when paired up with his little brother, Jordan). But he’s also a keen businessman with a straightforward understanding of the modern platform-building world. He has successfully built a business for himself, one that the attendees of the Texas Training Minds Camp will definitely glean much from.

Most of all, Josh loves to teach others. We had only 50 students attend our For Action Conference in January, but he was a magnet to most of the kids. Josh loved sharing his understanding of the social media world with the young adults at the conference.

Just recently, Josh launched a podcast dedicated to teaching the inner workings of YouTube platform building. The name of the channel is “The Inner Tube.” (Get it?) He teams up with another big YouTuber, Kevin McCreary, for this weekly podcast.

I hope you come to Training Minds Camp to be trained to be the best competitive speaker and debater on the planet.

But I also hope you have higher aspirations for your future, one that uses your skills to make a positive impact on the world.

That’s what Training Minds is all about, and Josh Taylor is keynoting this greater idea is an event you won’t want to miss. We hope to see you there! 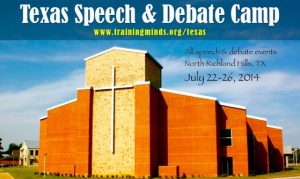