Haven’t we all been caught up in urban legends? Be honest. Most of us have been caught forwarding on a message of untruth to save our friends from impending doom. We were likely corrected by friends, but it didn’t help our feeling of embarrassment. 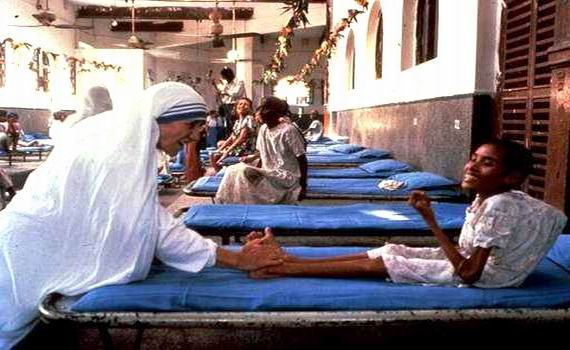 For most of us, the error taught us three valuable lessons:

Then there’s the friend who breaks all of these, like the guy who’s hating on Mother Teresa. He won’t let up. From behind his wife’s iPad and Facebook account, “Joel” has written nearly a book insisting Mother Teresa was a heretic. He hasn’t learned the three lessons most everyone else on the planet learned about urban legends.

Normally, I’d drop such foolishness and get back to life. I have better things to do. But I honestly feel that underneath this foolish Facebook exchange of the past couple days lies lessons that are worth remembering. If anything else, it’ll put to rest some floating lies about Mother Teresa.

Joel’s rant started with my wife. Wendy posted a quote from Mother Teresa that she read for her sister’s memorial service. Wendy had thought it helpful — and 99 percent of the people who read it probably did, too — but that didn’t stop Joel’s wife from publicly reminding Wendy that Mother Teresa was a “heretic” and a perpetrator of a “false gospel.”

Yesterday’s post goes into that, and you can dredge through that here.

Wendy and I (and quite a few other friends of Wendy’s) tried to correct Joel with simple FB responses, and it should have ended there. I thought Joel would go back to his wife’s iPad and perhaps check his sources. No, he didn’t. He doubled down and insisted that we (and most everyone else on the planet) didn’t know the “truth” about Mother Teresa.

As Bill Cosby said, sometimes you just have to give the ridiculous a try. Joel left a hyperlink to an external site that he claimed “explains Mother Teresa with her own words.” He insisted that this source would convince me and everyone on the wrong side of this Facebook debate. So I gave Joel the benefit of the doubt, and I visited the site, the one with Mother Teresa’s own words of heresy. Maybe Mother Teresa was really a heretic, and this site would set me straight.

Mind you: This was an honest-to-goodness, wholehearted attempt to take Joel seriously. I’m not being facetious here. This is how debaters think: they crawl inside the head of their opponent and try to see the world through those eyes. His link, according to Joel, would set me straight and prove to all my Facebook friends that Mother Teresa was evil.

Nine minutes. That’s how long it took me to see through the lies. I’m not sure why Joel didn’t. I actually grew angry as I read. I am troubled with this: how can anyone with an ounce of reason in their brains believe this crap? 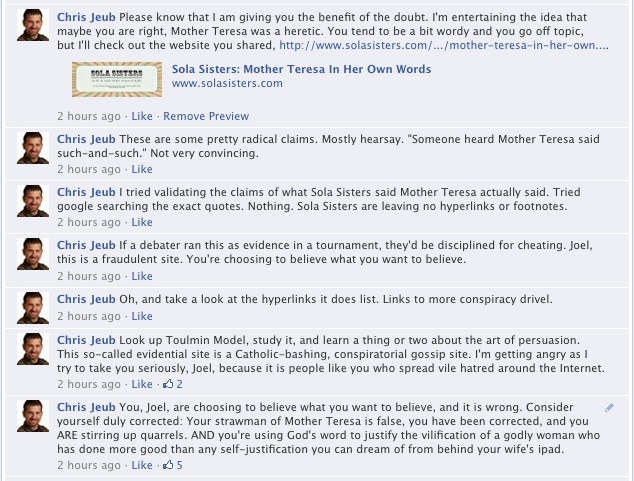 Seriously, nine minutes and I had the page — the one that would make me believe — torn to shreds. I tried, but I could not validate one of the site’s claims. Not one. It was hearsay and gossip. “Someone heard Mother Teresa say such-and-such”…and the reader was supposed to blindly believe. Even the so-called direct quotes (actually, there was only one) was nowhere to be found on a Google search. No citations or links to validate any of the site’s claims. Just links to other conspiracy sites.

I figured out why there were no citations. The author is a plagiarizer. A liar. The opening quote, the sole direct quote from Mother Teresa herself, was lifted from another site and pasted as her own. Total, utter, get-yourself-an-F theft of intellectual (or lack thereof) property. The “emphasis mine” is not hers, folks. She’s a thief and a liar.

And this author has hundreds of subscribers. That irritates me.

See where evidence fabrication gets you, boys and girls? This kind of rubbish gets you thrown from debate tournaments, or should. Being wrong isn’t a big deal, but insisting that you are not wrong by using fabrications and lies is insane, which I’ll get to in a minute. But first, a lesson that I believe should be considered by all reasonable thinkers…

Joel’s link convinced me of this: people believe what they want to believe. It seemed to not matter if this web page was full of lies. It validated Joel’s prejudices and he wanted to spread it far and wide. And in the name of Jesus.

I get myself into hot water sometimes when I insist that skepticism isn’t such a bad thing. People mistakenly think I mean doubt the bible or some tenant of the faith or some already-proven truth of some sort. They think I’m trying to lead people astray by claiming “doubt” to be okay.

Um, they’re right. I am encouraging doubt. Always question your thoughts and opinions and what you think is true. I have come to realize that the opposite of faith is not doubt, but rather fear. And those who wall themselves up within a barricade of so-called truth that cannot be questioned are really full of fear.

Perhaps to some, encouraging doubt is heresy. I suspect Joel is one of these “doubters of doubt.” Who knows, maybe he’ll double down yet again by attacking me with secluded bible verses about how bad it is to doubt. (I have a reply to that, by the way, where “unbelief” is different than doubt, but I digress.) My point now is this: Without doubt, you confuse belief with faith, and often end up victim to the most outlandish lies.

I admittedly am getting worked up over this, but here’s why this is so important: Way too many Christians do this. They so desperately believe in that which is not true that they wall themselves up in prejudices, pride and falsity. When they claim to have the validation from God’s word (or, in Joel’s case, conspiracy websites), they are perpetuating lunacy.

Yes, lunacy. This is insane. Functional thought does not continue to wind itself up around an axle of fabricated lies. Somewhere in Joel’s line of thinking, the truth didn’t matter. All that mattered was the sacred belief that manifested on a wobbly lie — that Mother Teresa was a heretic of a false gospel — and he felt called to spread the lie as far as his fingers could type.

I’m writing this article with my audience in mind — subscribers to this site and typical folks who enjoy “training the mind for action” (1 Peter 1:13). Joel probably isn’t a subscriber, but he will likely read this post, or at least I hope he does. My criticism of you, Joel, is not because you’re a bad guy. I’m sure you and I would have a nice conversation if sitting around a campfire enjoying one another.

But you have been duped along the way. What you have insisted on believing is a genuine problem in the Christian community at large, and you are perpetuating the problem with your insane logic and conspiracy theories.

This is why I teach debate: to train young people the strategy of proper thought.

I was extremely proud of a few of the commentators in the Facebook thread. The ones who made the most sense were debaters. I love to gloat about the debate community I love because time and time again, debaters shine through as the stable, rational, persuasive ones in the bunch.

Perhaps some of them will take after the likes of Mother Teresa. The world would most certainly be a better place with more “heretics” like her.

A final thought on Mother Teresa: she’s one of the most misquoted figures in current history. Check this website put together by her order of nuns, their attempt to set the record straight: http://www.motherteresa.org.