I can only guess from the previews how Ridley Scott will develop the character of Moses in December’s release of Exodus: God and Kings. I hope he dives deep, for Moses was a complex man in Jewish history. If interpreted right, we all could (or should!) identify with him. 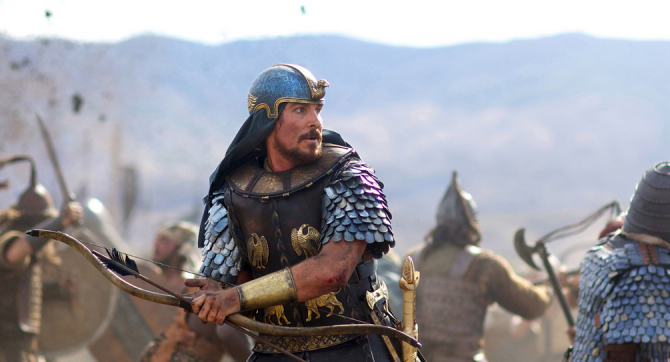 Darrin Aronofsky attempted to do something significant with Noah: he attempted to unfold a complex understanding of one of the epic characters of the bible. Unfortunately for Aronofsky, scripture refers to Noah as “a righteous man,” and tons of Christians read that as “a perfect man.” Too bad, because Aronofsky’s Noah explored the human attributes of the man who participated in the near-decimation of humanity. To me, this was an incredible story that delved deep into Noah’s biography amidst a troubled world. Noah wasn’t perfect; he was righteous. He very well could have steered off the path of the Creator, as the movie explored, but he never once felt called off the path of devotion.

I don’t really want to rehash the movie Noah. I think more of my friends disagreed with my critique than agreed. I suppose that’s okay (read Why Creationists Can Appreciate Noah). Interesting: the character of Noah was written by Moses, or at least bible scholars suspect it so. And soon Ridley Scott is bringing Moses to the Silver Screen, and I welcome the attempt to capture the epic story. The bible is filled with them!

I don’t know the details yet, but I’m secretly hoping Ridley Scott includes three insights into the character of Moses that Christians should explore. We typically find these insights difficult. At least I have had a difficult time in life exploring these insights, but have found nothing but freedom in them.

It is no doubt that ancient Egypt is a most fascinating civilization in history. It is so unbelievable that the idea exists that extraterrestrials played a significant role in Egypt’s advancements. This theory is laughable, but it is actually given serious consideration among historians, showing to me how miraculous Egyptian polytheistic development was at this time in history.

I suppose its success could be credited to polytheistic paganism just as it can to extraterrestrials, but I don’t like to discredit the Judaic influence of ancient Egypt. The history is right there in the bible — in Exodus — and Moses probably wrote it from word-of-mouth memory, as only 400 years had passed since the story of Joseph. Egypt became the economic center of the world. They flourished for four centuries and prospered greatly. Mankind is capable of these kinds of advancements, especially over 400 years of prosperity. Just look at how the world has developed since 1614!

In the end, the Jews won and the Egyptians lost. That’s the story Ridley Scott is bringing to theaters. Moses interpreted his people as God’s chosen. Egyptians thought they were the gods, and judging from the previews of Exodus: Gods and Kings, Scott will make it clear that the Egyptians felt justified in their egocentric view of their great kingdom.

The comparisons between ancient Egypt and modern America are stark, and I hope this comes out in theater.

I believe there is an eerie similarity between the American egocentric culture and Egypt’s. If we are brave enough to admit it, we Americans are just as cocky proud as the ancient Egyptians. The parallels are quite obvious, especially when we consider America’s Christian heritage and how far we have strayed from it after 200 years. Who knows, in a couple hundred more years, maybe we’ll think we are gods.

I’m not sure if Scott will delve into this insight, but I do hope he delves into the root perspective of the patriarch. Moses was raised to believe he was in the royal family a god, of divine authority, a benefactor of all the riches from the greatest kingdom the world had ever witnessed.

But then a change happened.

Chapter 3 of Exodus tells of Moses’ transformation. It must have been a massive challenge for Moses. It kicks off the entire story, and it shows Moses on a very personal journey:

I can relate to transformations like this. I hope Scott’s literary interpretation of Exodus 3 captures this moment of Moses’ personal exodus from Egyptian culture. I suspect it was a “born again” experience in the sense that Moses would never be the same again.

I believe we all desire transformation, we’re just scared of the change that comes with it.

I’d like Scott to explore this, but I don’t want him to miss this most important mark that Hollywood seems to miss every single time they venture into biblical interpretation: Moses’ transformation was based in truth, not fabrication.

There is an annoying assumption that secularists tend to make in modern literature and film. They insist that biblical characters are really just fantasy stories or myth, perhaps even fabrications in history. No, Moses’ life was very real and incredibly significant. He encountered the Creator, was allowed to walk “on holy ground,” and was brave enough to allow the Creator to write his life story. All of this is written in the third chapter of Exodus. Trying to say this is a fabricated conspiracy of some sort is as silly as saying extraterrestrials were the reason for all of this.

Moses was a Jew. That was his truth. He had the choice to abandon or embrace it, and he chose the latter. The truth set him free — free to change, transform, and do that which was impossible.

Instead, Moses chose uncomfortable reality. Just like we all are challenged in life. I hope Ridley Scott captures this complex conflict of the life of Moses, because that was the only kind of Moses that could have truly freed the Jews from captivity. And it is the only Moses I can identify with.

The third incredible insight that I hope Scott shows is the epic impossibility of which Moses was dealt. The Jews were extorted into captivity to help build the mighty kingdom of Egypt. But now God used Moses to free the slaves from the world power. I can’t wait to see the special effects of the miracles of God that Moses brought to Egypt, but I’m more intrigued with the story that lies behind them.

I believe in the impossible, that miracles are derived from the impossibilities in our lives. Christians tend to lose sight of this in their biblical interpretations. The flannel-board Moses we get in Sunday school tends to romanticize a holier-than-thou Moses, a priestly, perfect man who didn’t struggle to take on the mountain-moving challenges called of him by God. Worse yet, we pretend that God was up in heaven waving his magic wand and mastering the entertainment like a puppet show. I cannot truly relate to this kind of neat and tidy story. Neither could Moses who called the Creator the “One True God,” a revolutionary reality that was forced upon the epicenter of the world at the time.

I sure hope Ridley Scott captures this real story because — and this is what makes it so epic, so impressionable — it is a storyline to which we all can relate.

You have impossibilities in your personal life story. So do I. We are all dealt with impossible obstacles in life. Let me go deeper. Aren’t we all enslaved in some way in our egocentric selves, seduced to believe we are gods? Or that we need to remain in our slavery, ignore the truth, keep perpetuating the lies of life that keep us from the freedom that God wants for us?

If we are real — as real as Moses was with himself — we will come to terms with our life’s impossibilities.

Every day I am alive, I want to go deeper in my faith, deep into my heart and free myself from the incredible impossibilities that enslave my soul. I hope this was like Moses, and I believe it was.

This interpretation of Moses is the real Moses. Spare me another Charlton Heston with rod and staff, boldly walking into the desert away from captivity as if it doesn’t frighten him in the least. I’d like to see Moses take on the impossible task of doing that which God is calling him to do, fully aware of the epic story unfolding before him but just as fully aware of the power of God in every step he takes.

I can identify with that story. And I hope Ridley Scott identifies, too.