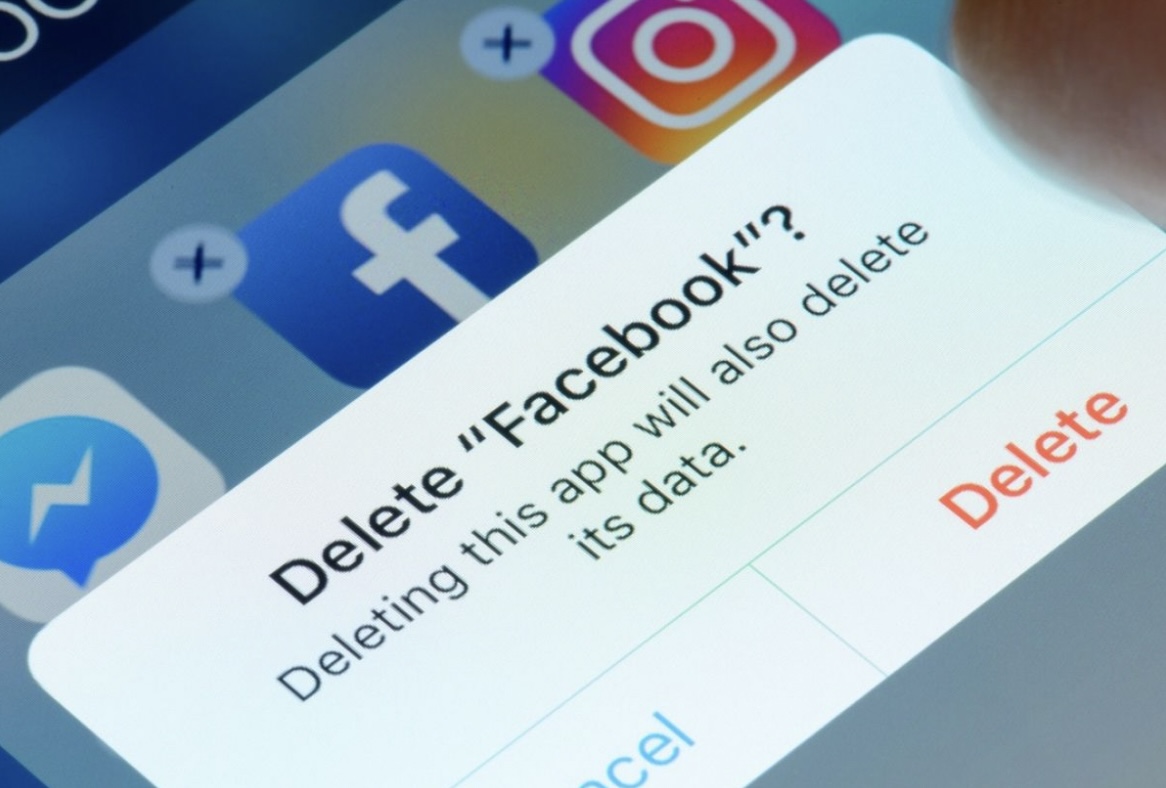 I will miss you, but I cannot continue this dysfunctional relationship. It’s not you and I who are the dysfunctional ones; it’s the Facebook platform that is. If my decision feels like a divorce, then we’re the children of the screwed-up parents, victims of their garbage family they built. I feel more like I’m sobering up to the reality. Like an addict standing in a crowd shouting out my weakness. Here is my cry:

Facebook has robbed me of personal dignity, relationships, and love. I’m jumping on a wagon to free myself.

Before I leave (my profile will go away in a week), let me explain to you the thinking behind my decision. It did not come easily, and if you have likewise felt drained, depressed, or disenfranchised by the luring cult of Facebook, please read on. I have three reasons why I’m “divorcing” Facebook from my life. You may choose not to follow, but I suspect my reasons will give you understanding of how you relate to Facebook.

How did you get into Facebook? For me it was several years ago when I witnessed a speech and debate tournament director handle all her administrative communications with the networking tool. I latched on and enjoyed the connectivity, and the platform has helped me be more efficient in my business. I recall (with not much fondness) the old days of bulk mail bins and paper newsletters. Facebook’s marketing revolution was one I gladly joined.

How alluring. This “free” resource promised so much for my businesses, but it has, over time, stripped me away from my purpose and valuable work. Like a red herring leading a fox from its trail, my social media feed drags me into the world’s weeds. I’ve tried to ration it, remove it from my to-do list, and give it up for prolonged periods of time. But it eventually wins when a lure too shiny to ignore comes in sight.

In a rational sense you can probably see why I found Facebook so handy. I wake every morning with a burning desire to write and teach, and the vast majority of my work remains unwritten and untaught. You’d think Facebook would be perfect for a guy like me, but it consistently leads me off my path. I’m drawn to post a photo, a clever quote, a meme I’ve come up with — or, worse, endlessly scroll through the posts of others. I am drained every time I walk away from my Facebook “feed” (another ironic term, as if I’m a lab rat addicted to its feeder), and I am never satisfied that I gave much of myself to others. After a while I wonder: Where did the time go?

A most recent example is my latest book, Facing Hate: Memoir of a Social Smear. The book took me six years to write — the longest I ever spent on any of my books — a work that, ironically, takes aim at the growing Facebook mob (more on that in my next reason to divorce Facebook).

But six years? Why so long? There were practical reasons, I admit as much in the book’s story of the trauma my family and I went through. But I must be honest: I spent way too much time weathering through the control Facebook put in my life.

I have much more to share in life than what Facebook demands, and I now see it as a drain. Deleting Facebook altogether is my earnest attempt to refill that well of water that has been drained nearly dry.

“Dividing” may be an understatement. Facebook breeds hate, and adrenaline shoots freely through the veins of the haters who troll its crevices. I’ve tried to connect with those who disagree with me on Facebook, have reasonable conversation, perhaps model a debate — but good has seldom come from my attempts. The weapons of choice in the online stadium of Facebook are public shaming and social smearing. It takes just a few to ruin any healthy dialogue, some users trolling my profile to ridicule and shame anyone of like mind. I’ve come to realize that Facebook encourages such behavior.

Compare Facebook to my life’s work: academic debate. I’ve authored entire textbooks on the subject, bestsellers in the small market of competitive speech. You’d think I’m all in for online disagreements, as the idea of “debate” pits two adversaries apart from one another. Facebook debates are nothing like academic debates. I explain in Facing Hate this way:

Have you ever gotten into an online debate? Rarely does anyone “win.” Remember, I’m a debate coach, a calculator of persuasion to win measured and strategic rounds at speech and debate tournaments. Yet I have found Facebook debates to be folly. No one ever wins, no one ever persuades anyone else, and the more you engage someone the more galvanized they become by their prejudiced beliefs, no matter how faulty or untrue. Thus, passionately engaging the social smearer is the Global Thermonuclear War of the social media world, and complete and utter destruction is no doubt the ultimate result. (Chapter 5: The Game)

I love a heated debate. And I absolutely love engaging in a healthy dialogue with someone of the opposite opinion or belief as mine. As a platform for debate, Facebook encourages ad hominem — shaming, smearing, ridicule — by allowing unwarranted and faulty claims and the ever-easy “angry” or “laugh” emojis. Is this debate? Absolutely not. It is divisiveness, pitting people against one another, humiliating the opposition and shaming alternative views. The real shame is in how healthy debate is replaced with a mob mentality. Truth seldom is the goal, and “cancelling” seems to be their ultimate objective.

For years I naively thought I could engage…until my social smear hit (Facing Hate is my memoir on it). The Facebook world doesn’t show mercy for your alternative or edgy beliefs. The mob expects conformity, and Facebook encourages your flow toward its narrative. Once the hatred is unleashed, the Facebook hornets overwhelm you:

“The only ones who have the stomach to keep in the fight are those haters. Reasonable people leave, exhausted and abused.” (Chapter 2: Our Smear)

Many of the fundamental fabrics of Facebook (and most social media platforms) are by design meant to pit you against others. Its algorithms purposely push you into an echo chamber easily manipulated by marketing manipulators, political advocates, and even foreign adversaries. Facebook doesn’t bring us together; it pushes us apart.

I once hoped the simple platform of Facebook would be a conduit for free and healthy discourse—a “market of ideas” or perhaps a way of seeking and finding truth. But I’ve now come to realize that Facebook is home for a brood of vipers, a place of fire and darkness, where there is “weeping and gnashing of teeth” (Matthew 8:12). It took my personal social smear to come to realize this:

“The online world we live in today can be awful. It can be a hell on earth. The socially smeared are hanging from nooses, burning at the stake and hanging on crosses along the horizon of the internet.” (Chapter 6: Heart Rock)

Am I being overly dramatic? I don’t think so, especially lately with its Orwellian censorship and shaming. Calling Facebook merely “deceiving” is as much an understatement as calling it divisive. The tool’s dark intent is not merely a bias or preference. San Francisco’s technical influencers have become social manipulators, arbiters of truth with foreign-run “fact checkers” to validate their claims. Facebook is not out to encourage free thinking and your ability to express yourself; Facebook is out to silence you. And they defend their position with a self-proclaimed “code of principles” backed by their self-selected “fact checkers” — as if that’s reassuring or persuadive.

You may be thinking that I’m coming on too strong, so let me give you a recent example. I’m sure it will be outdated soon (or covered up). I was one of millions who were naturally disturbed when news started spreading about possible fraud and irregularities of the 2O2O Election. I believe most Americans were, too…until Facebook steered us away. The platform deliberately censored select news, shadow banned certain sources, and shamed users who were curious. Some of my honest inquiries were labeled “misinformation” and even “false.”

Did this not happen to you? Well, no offense, but you probably conform quite well. I do not, but I think nonconformity is a good thing. Don’t you?

My most nonconformist inquiry was when news dropped showing — on video! — voter boxes rolled out on the floor in the middle of the night when no poll watchers were present. I posted my concern on Facebook. I was curious! Facebook slapped this on my post: 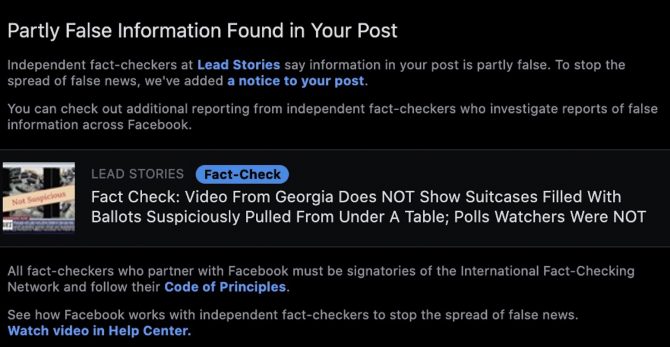 Keep in mind that this was a developing news story that broke within minutes of my inquiry, yet somehow Facebook was ready to stomp out any curiosity, fully armed with a “fact-check” article that denied any need for further questioning. And shame on anyone who doesn’t abide on the Facebook “code of principles,” a slam on those of us expressing concern, an attempt to humiliate anyone curious for answers.

[By the way, most don’t click through to investigate Facebook’s claim of “false” information, and I think they bet on that. I did. The “fact-check” was ridiculous to any rational observer. My concern was the video I watched of blatant voter fraud — right before my eyes! — yet Lead Stories — writers apparently outsourced from foreign countries — focused on the semantic use of the word “suitcases” (they were “ballot boxes,” silly me) and that poll watchers were “asked,” not “forced,” to go home (as if that mattered at all).]

Now that the election disputes have been put to rest (arguably suppressed), do you really think Facebook will stop their manipulation and all-out deception? I’m betting that they’re now more emboldened than ever.

By the way, where are the First Amendment, civil liberties, anti-censorship folks? The ACLU has all but vanished, silent on the issue of online censorship since the 1990’s.

The public manipulation of news is a huge reason to delete Facebook. I feel as if it my patriotic duty to do so. Some are at least calling for its removal from Section 320 of the Communications Decency Act, essentially declaring them a news organization rather than a networking platform. Makes sense to me. Do you think that will happen under a Biden administration? Yeah, right. It’s quite arguable the platform’s shady tactics helped get him into office.

I refuse to play these dysfunctional, manipulative games any longer. Facebook is a FAKE book, a shadowy adversary to all that good people are called to do. It drains us, divides us, and deceives us. I’ll be following suit with Twitter and likely other social media platforms. For now, so long, Facebook. I’m divorcing you.

If social media is your way to stay connected, let’s go back to the ever-reliable and old-fashioned email. It’s still free…plus I’ll send you a FREE copy of a Chris Jeub book. I will open up some more conversational features soon, so…