I have some free sample downloads that I’ll share with you in a minute, but I want to strongly encourage you to jump into debate (or get your kids to do so). I was reminded of why by my friend, Vance.

Vance Trefethen is one of the most respected debate coaches in the homeschool leagues (about 5,000 families strong). He’s author of Keys to Team-Policy Debate and head coach of my Training Minds Camps. I’m privileged to have him on board as my #1 debate brief writer for my bestselling debate sourcebook, Blue Book.

I’m extremely privileged to be Vance’s friend, but he’s one of those kinds of friends who knows everything. The guy is a genius. He’ll be heading up our Texas Camp and DC Camp next month (space is still available) where he’ll fill the room with homeschool kids and their parents and talk everything there is to talk about the debate resolutions.

Vance writes the research of the Blue Book. He has already written cases on defunding much of the aid we give to the Middle East, including both Israel and Palestine. These are both polarizing issues for those of us who genuinely care about our foreign policy in the Middle East. We get ourselves into hot water with some parents who feel we should write only one-sided cases. They usually don’t understand debate.

We’re not advocates for either side of the resolution; we’re advocates of the activity. Vance hit on this squarely when he wrote this about Middle East foreign policy (emphases added):

“The Middle East is a region that can inspire excitement, zeal, hate and loathing, even among many who don’t live there. You may or may not have pre-existing beliefs about the region and its politics. If you do, I strongly urge you to do what every debater should do every year: Learn the history, the arguments, and the evidence from all sides of every issue equally.

Remember that in policy debate, your position is assigned to you at the start of the round. If you’re Affirmative, you can pick what you want to talk about and advocate for. But if you’re Negative (which you will be 50% of the time), you do not get to pick. You must simply oppose whatever the Affirmative is arguing, even if they are arguing for things you personally agree with.

That means you have to understand and be able to argue for policies that you may be opposed to. That’s a feature, not a defect, in team policy debate. You will find your mind and horizons greatly broadened. And you never know: You just might change your mind about some things after hearing and debating both sides.“

That, my friend, is why you would likely love debate. Taking both sides of an issue and thoroughly analyzing them is not (as some have tried to say) playing the devil’s advocate. That may be a clever hyperbole, but I tend to think it is an unfortunate metaphor for a healthy exercise of the mind.

In fact, I’ll go so far as to say this: If you want to give the devil full reign on your brain, restrict all your studies to one side of important issues.

You’ll be a jerk, too, and won’t persuade anyone. You will surround yourself with only people who agree with you, and any reasonable friends you have will drift away. Taking one side of an issue without any consideration to the opposition is foolishness. Debaters understand this. The activity “trains the mind for action” (1 Peter 1:13) unlike any academic activity can. You (or your kids) should do it.

And I have some free downloads to encourage you to! Vance and I are in the process of writing two Blue Book sourcebooks — Stoa and NCFCA, two homeschool leagues whose resolutions were released for next year. Thousands of homeschoolers will be debating the following resolutions:

Vance and I have been writing Blue Book for 14 years (I actually started it in 1998, Vance jumping on board later). Champion debaters eat it up, devouring the cases and briefs we come up with, but we really have new debaters in mind. Truth is, academic debate is a complicated event to participate in. We do our best to make it easy on you.

I hope every team-policy debater buys Blue Book this summer. The selling of this book along fuels all that I do in my camps and events. But I do have some free downloads for you!

Click the links below and receive four introductory samples from the $40 sourcebook:

Of course, this is just a fraction of the fuller Blue Book. Nine remaining chapters, the 2A evidence, the negative brief, and 11 more just like them come with your purchase of the real deal. Click the image below for the league of your choice: 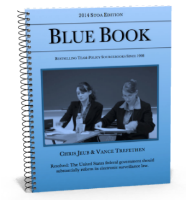 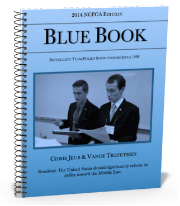 Download is a PDF of between 300 and 500 kbs. Its contents consist of about 4% of the actual Blue Book.